Archery team aims for the top 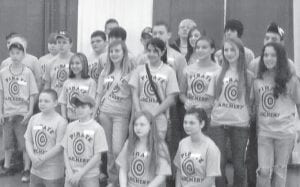 The program is growing and continues to grow because of the increased self-confidence, focus, discipline and motivation it teaches students.

Fleming-Neon Elementary School, the only school in Letcher County School System that offers an archery program, continues its improvement and growth as one of the top programs in the eastern Kentucky region.

March 23, Fleming-Neon took 24 students to Louisville to compete in the finals. After finishing second in regional competition, the Pirates finished 19th overall in the state.

The archery program continues to grow in popularity across Kentucky, and has grown at Fleming-Neon as well. This is the third year that it as fielded a program, and each year the number of participants has increased.

Last year, the Fleming- Neon archery team went to the state and was content to just be there, but the students made a commitment this year to compete, and they did just that.

Out of 3,600 points available, Pirate archers scored 3045, which placed them on the same level as the upper tier programs in the state.

The first year Fleming- Neon averaged about 2,500 points per competition, last year it climbed to 2,700 in the state and finished 41st overall.

This year the students took it to a while new level.

Makaley Johnson scorched the target for 261 points to lead the girls’ side. Taylor Collier finished second with a 248.

The dedication of the students is unbelievable. They came and practiced during snow days, after they had basketball practice, academic practice, softball and baseball practice, and never complained unless the practice was canceled.

Practice is not mandatory, and students are not punished for not showing up. But that is never an issue.

Archery is a program that sells itself. The students want to be there. The program allows students to compete on a level playing field, regardless of gender, size, or athletic ability.

Each team must have at least four of the opposite gender on the roster to be scored, which makes everyone on the team equally important.

Archery in the schools has grown every year, with competitions having more participants each year.

If you are interested in having your school developing the National Archery in the Schools Program, contact Kenny Roark at Leatherwood Elementary, or Jim McCauley at Fleming-Neon Elementary School.