Archery team does well in tourney 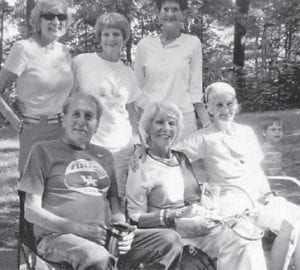 The Lucas family reunion was held June 8 in Somerset. Pictured are the children of Edgar and Julia Lucas, Sheila, Jolene, Coetta, Neal, Claudette and Loretta.

Our family enjoyed the memorial service “June Meeting” at the Whitaker Cemetery on Johnson’s Fork at Premium on June 22 and 23. It is always nice to catch up with friends and family that you haven’t seen in a while and be able to pay respect to the deceased as well.

I’m always drawn to the saying on my great-grandmother, Nannie Bell Caudill Whitaker’s, grave. Her headstone reads, “Remember me as you pass by; As you are now, so once was I; As I am now, you soon shall be, prepare for death and follow me.” How true is that? Makes you think, doesn’t it?

Mom, Sylvania Whitaker, had a scare with her kidney and had to visit the emergency room at UK to see the transplant team. She had infection in and around her kidney. They did blood work, CAT-scans, and several other tests. Everything looked okay, and her kidney was functioning as it should, so she was given antibiotics and is doing much better now. Thank God. We were so scared that she was rejecting the kidney.

Laramie Adams had another surgery last week. He is home now, but I haven’t heard how he is doing. Continue to keep him in your prayers.

Roger Lee Whitaker Jr. and Sandra Collins were married on July 4 at the Bull Creek Old Regular Baptist Church. Rachael Smith and Michael Phillips were married on that same day. Congratulations to all of you. I wish both couples the best.

My nephew Austin Whitaker, son of Wade and Lena Whitaker, participated in the World Championship Archery Tournament in St. Louis, Mo., the last weekend in June with the Letcher County Central archery team. My cousin Jordan Whitaker, son of Johnny Roy and Tammy Whitaker and Teresa and Nelson Hopkins, also participated. I am extremely proud of the whole team as they placed eighth in the world. That is something to be proud of. Congratulations to all of you.

Austin’s little brother, Alex Whitaker, participated in an archery camp held this week. Even though he bruised his arm shooting, I think he enjoyed himself.

My boys Bailey and Dalton enjoyed showing their Broken Buck Mini-Rex rabbits at the Garrard County Fair on June 26 with the Letcher County 4-H livestock program. Bailey’s rabbit, Jabba, won a second place for their breed and Dalton’s rabbit, Jango, got fourth. It is always exciting when you win a ribbon, but I’m proud to say that even if they don’t walk away winners, my boys always enjoy just being there and doing something fun, and educational, with their friends. They are super excited about the state fair.

Michael, Opal Jent, and I took the boys to spend the weekend at the cabin in Jabez on July 12 through July 14. We enjoyed fishing and swimming in the lake, but most of all we enjoyed relaxing on the porch, listening to the creek run by, the wind blow through the trees, and the birds singing. If you ask the kids, I am sure spending Saturday afternoon at Somersplash Waterpark was their favorite part of the weekend. Missy and Wayne Fields brought their daughter Lexi and granddaughter Kylee and met us at the park. They stayed at the cabin with us Saturday night. Michael cut his toe wide open and Opal tripped and about broke her shinbone, but other than a few minor injuries, we had a nice time.

On the way home, we stopped by the cemetery at Southern Oaks Funeral Home to visit my uncle David Allen Blair’s grave. I was sick when he died and wasn’t able to attend the funeral. It meant a lot to me to stop and see where he was laid to rest.

Ward and Dwana Whitaker enjoyed vacationing in Garden City Beach, S.C., this past week. I’m glad they had a nice time. Most of all, I am thankful they had a safe trip there and back.

My niece Tonya Fields, daughter of Wayne and Missy Fields, was in a pretty bad car accident on Friday in Pikeville. It sure scared us all to death. There was a lot of damage to both vehicles involved, but thankfully, Tonya and the other driver were both okay except for some minor injuries.

Happy birthday to all of you. I hope your special day is filled with all the love and laughter in the world.

Happy anniversary to all these very special couples. Congratulations on the many love-filled years you have had. I wish you many more!

We will be having our annual Halcomb-Blair reunion on Saturday, Aug. 3, at the Cowan Community Center. We will have a potluck dinner around noon. Everyone is invited to attend. Whether you want to discuss genealogy, play corn hole, or just see some friends you haven’t had a chance to talk to in a while, bring a dish and come join the fun.

The Adams-Thompson- Blair reunion is that same weekend on the top of Arthur’s Loop if you would like to stop by there as well.

If I have left anyone or anything out, just let me know and I will be glad you get you next time. I hope everyone has a healthy and happy week. If you would like to contact me, feel free to give me a call or you may email me at alanacouch@hotmail.com.