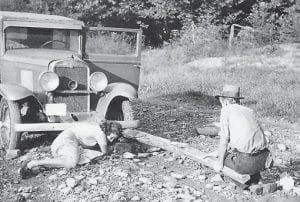 FSA photographer Marion Post Wolcott copes with car trouble in eastern Kentucky in 1940 — with the help of a local man and a fencepost as a jack.

If you’ve ever read The Grapes of Wrath, or seen the movie, you remember the moment when Tom Joad (Henry Fonda), anticipating being killed (“if all our folks got together and yelled”), wonders whether “a fellow ain’t got a soul of his own, just a little piece of a big soul, the one big soul that belongs to everybody, then…”

His mother asks, “Then what, Tom?”

He answers: “Then it don’t matter. I’ll be all around in the dark — I’ll be everywhere. Wherever you can look — wherever there’s a fight, so hungry people can eat, I’ll be there. Wherever there’s a cop beatin’ up a guy, I’ll be there. I’ll be in the way guys yell when they’re mad. I’ll be in the way kids laugh when they’re hungry and they know supper’s ready, and when the people are eatin’ the stuff they raise and livin’ in the houses they build — I’ll be there, too.”

Archie Green, who died on March 22 at the age of 91, will be everywhere. He had a home in San Francisco, but he was at home in eastern Kentucky, too, and in thousands of other places. He roamed widely and incurably, noticing people who were part of “the one big soul that belongs to everybody” and insisting that attention be paid. He noticed coal miners and ballad writers, ranchers and shipwrights, firefighters and auto workers, seafarers and machinists. He recorded their words and their music, immortalized them in articles and books (including Only A Miner, a superb collection of words, music, and photographs published in 1972), and after years of lobbying he persuaded Congress to celebrate the bicentennial of the United States by creating the American Folklife Center in 1976. Part of the Library of Congress, the Center sponsors festivals and is a place where researchers can go to find out what really makes America work — what we inherit and what we pass on. It’s one of Archie Green’s many gifts to the land and people he loved.

He had another gift in mind, and was working on it when he died. Coming of age during the Depression (when he found work in the Civilian Conservation Corps), he admired the photographers who documented the era for the federal Farm Security Administration (FSA). From 1935 to 1943 they fanned out across the country, photographing Americans as they struggled and despaired and coped and celebrated. The small band of FSA photographers seemed to go everywhere (see the photo below), and they created a vast body of photographs. At the same time, the Federal Writers Project got down on paper a record of the Depression and the spirit of those who worked and fought their way through it. The result was a unique moment in history when an entire nation sat for its portrait.

“We remember the New Deal because we can see it,” notes Bill Bishop, who used to write for this newspaper and now runs the online Daily Yonder (www.dailyyonder.com) with Julie Ardery, his wife. Their friend Archie Green wanted Congress and the Obama administration to set aside funding to document our own time, and specifically the impact of the infrastructure-rebuilding projects being made possible by federal economic-stimulus funds. In a recent memo to House Speaker Nancy Pelosi he advocated creation of a cultural unit to document the recovery work as it occurs and to present this documentation to the public and the workforce itself.

Times and techniques have changed, but Archie Green’s vision is timeless and timely. One of the ways we got through the Depression was by learning that we’re all in this together. One of the ways we’ll get through the present mess is by rediscovering that truth and recording the evidence. To twist an ancient saying around, when someone plants a tree (on an old unreclaimed strip mine, let’s say) someone else should be there to record it: otherwise we’ll never hear the sound of solidarity or see the evidence of recovery.

Archie Green knew what it took to persist and prevail. We need to pay attention to what he learned, and what he can still teach.