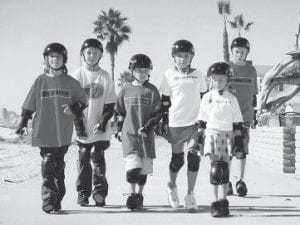 Trendy wheeled sneakers that let kids zip down sidewalks, across playgrounds and through mall crowds could also send them rolling into emergency rooms on a stretcher, say doctors who blame a rash of injuries on the international craze.

It’s called “heeling,” named after Heelys, the most popular brand. They’re sold in 70 countries and are so hot that their Carrollton, Texas, maker, Heelys Inc., recently landed atop BusinessWeek’s annual list of fastest growing companies.

But doctors from Ireland to Singapore have reported treating broken wrists, arms and ankles; dislocated elbows and even cracked skulls in children injured while wearing roller shoes.

From September 2005 through December 2006, one death and at least 64 roller-shoe injuries were reported to the U.S. Consumer Product Safety Commission, a spokesman said last week.

And doctors in Singapore reported last year that 37 children had been treated for similar injuries at a hospital there during a seven-month period in 2004. None were wearing protective gear.

The American Academy of Orthopaedic Surgeons, based in Rosemont, Ill., this week is issuing new safety advice that recommends helmets, wrist protectors and knee and elbow pads for kids who wear wheeled shoes.

“As these shoes are sold in department stores, parents buying them may develop a false sense of security – that they are like any other shoe,” said Dr. James Beaty, academy president and a pediatric orthopedic surgeon in Memphis.

Heelys and their knockoffs look like gym shoes, but with wheel sockets in each heel. They can be used for walking, but the wheels pop out when users shift their weight to their heels.

Balancing on the wheels can be tricky, especially for novices. In the Irish study, most injuries were in new users and occurred when kids fell backward while trying to transfer their body weight.

Dr. Leon Benson of Evanston Northwestern Healthcare in Evanston, Ill., recalled treating a 9-year-old girl who’d had her Heelys for just a week when she fell and broke both wrists.

“All it took was a tiny piece of gravel in the driveway that went up in the wheel and stopped him cold,” said his mother, Nancy. “He required surgery and pins, and he was six weeks without using his hand, right at the beginning of school.”

She threw the removable wheels away and said other parents should know about the risks.

Dr. Dominic Catanese, a foot specialist at Montefiore Medical Center in New York, said balancing on heels can strain feet and Achilles tendons. He has treated several Heelys-related ankle injuries and won’t let his 7-yearold daughter have the shoes.

“She wants them. Not happening. Just like I took away her trampoline” after reading about trampoline injuries. “It went right to Goodwill,” Catanese said.

Heelys in April said a study it commissioned shows that their shoes have a safer injury rate than skateboarding, inline skating and even swimming.

The shoes are sold with safety information including a recommendation to wear protective gear.

The company says it has shipped more than 10 million pairs since their introduction in 2000. Heelys reported first-quarter income of $8.5 million, five times higher than last year.

Still, some walkers find heelers who zip in and out of crowds a nuisance, and many schools and shopping malls have banned them.

Kelly Ford, 14, used to cruise down the halls of her Chicago grammar school in Heelys – a practice that led teachers to confiscate some kids’ wheels.

Now a high school freshman, Ford has outgrown her Heelys. She said kids who wear them won’t pay much attention to safety warnings.

“I don’t think any kid is going to want to wear a helmet to school,” Ford said.

She thinks Heelys are being unfairly targeted.