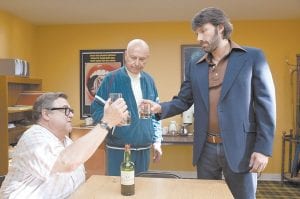 The top eight films of 2012, according to AP Movie Critic Christy Lemire:

1. “Argo” — Directing just his third feature, Ben Affleck has come up with a seamless blend of detailed international drama and breathtaking suspense, with just the right amount of dry humor to provide context and levity. He shows a deft handling of tone, especially in making difficult transitions between scenes in Tehran, Washington and Hollywood, but also gives one of his strongest performances yet in front of the camera. The story of a rescue during the 1979 Iranian hostage crisis sounds like eat-your-vegetables cinema, and mixing it with an inside- Hollywood comedy sounds impossible, but Affleck and screenwriter Chris Terrio pull it all off.

2. “Beasts of the Southern Wild” — This is sheer poetry on screen: an explosion of joy in the midst of startling squalor and one of the most visceral, original films to come along in a while. The story of a little girl named Hushpuppy (Quvenzhane

Wallis) living with her daddy on a remote, primal strip of eroding land in the southernmost reaches of the Louisiana bayou is so ambitious and so accomplished, it’s amazing that it’s only director Benh Zeitlin’s first feature. His film is at once dreamlike and brutal, ethereal yet powerfully emotional.

3. “Skyfall” — One of the best James Bond films ever starring the best Bond yet in Daniel Craig. It’s also the most gorgeous installment in the 23-film franchise, with Sam Mendes directing and Roger Deakins as cinematographer. It’s full of the requisite thrills but also complicated and meaty, featuring an agent who isn’t always slick and doesn’t always have the answers in hunting an elusive cyberterrorist (a fantastic Javier Bardem).

4. “Holy Motors” — This movie is just straight-up nuts, in all the best ways. Writer-director Leos Carax’s journey provides a joyous, surprising and darkly funny exploration of all the best cinema has to offer. Yes, this is a capital-A art film, one that challenges the viewer and leaves a lot of room for interpretation, but that’s part of the adventure. Denis Lavant gives a tour-de-force performance, assuming nine different roles as a mysterious man who travels around Paris in the back of a limousine all day, carrying out various assignments. Hop in and buckle up.

5. “Zero Dark Thirty” — A huge achievement from both technical and storytelling perspectives. Following the Oscar success of “The Hurt Locker,” director Kathryn Bigelow reteams with writer Mark Boal to tell an even larger and more complicated story: the decadelong hunt for Osama bun Laden. The attention to detail, to getting it right each step of the way, is evident in every element. And Jessica Chastain is relentless and self-possessed in a rare leading role as a young CIA officer on the case.

6. “The Master” — Paul Thomas Anderson, long a master himself of technique and tone, has created a startling, stunningly gorgeous film shot in lushly vibrant 70mm, with impeccable production design and powerful performances from stars Joaquin Phoenix, Philip Seymour Hoffman and Amy Adams. But this story of a wayward man and the charismatic cult leader who guides him — which may or may not have been inspired by Church of Scientology founder L. Ron Hubbard — is also his most ambitious film yet.

7. “The Imposter” — A gripping documentary about a missing boy filled with the kind of twists, turns and dramatic character revelations of a page-turner mystery. Director Bart Layton takes a story that was already fascinatingly weird to begin with and makes it even more compelling by structuring it as a shadowy film noir, offering information in expertly paced, precisely measured amounts to maximize suspense.

8. “Moonrise Kingdom” — If you love Wes Anderson, you’ll love this: The best of what he can do is vibrantly on display. The screenplay, which he cowrote with Roman Coppola, has resulted in his sweetest and most sincere live-action movie since the one that remains his best, 1998’s “Rushmore.”