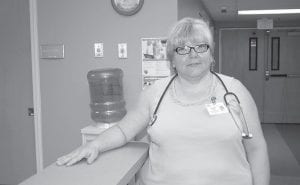 Above, nurse practitioner Alicia Cook treats patients at the Jenkins ARH Family Care Center. She has been at the clinic fulltime since November.

All of the central billing for Appalachian Regional Healthcare’s nine facilities is now being processed in Jenkins.

“They are all under one roof and everybody’s billing is done there,” said Dena C. Sparkman, community chief executive officer at Whitesburg ARH.

Since ARH bought the 25-bed Jenkins Community Hospital from Kingsport-based Wellmont Health System last April and reopened it as Jenkins ARH Family Care Center, the third floor of the facility has been renovated into a central billing office.

“This is one of the biggest transitions in my 31 years at ARH,” said Pat Amburgey, revenue cycle manager at ARH.

“There are more employees there now,” said Sparkman. “We were able to retain good jobs in that area.”

Amburgey said the third floor had at one time been a patient floor of the old hospital before it was renovated. 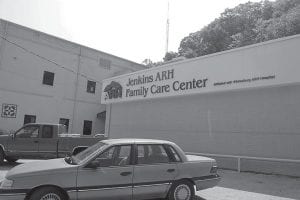 At right, the Jenkins ARH Family Care Center is located in the old Jenkins Community Hospital.

“Everything is new from top to bottom,” said Amburgey.

The second floor of the facility is being used for storage.

The first floor, which used to be an emergency room, now serves as a clinic headed by nurse practitioner Alicia Cook.

“The people have been very accepting of me,” said Cook, who has been at the Jenkins facility fulltime since November. “It’s a good service to the community to have their health care local.”

Sparkman said Cook has such a passion for rural families and rural health.

Cook sees about 30 patients a day. She also is a sexual assault examiner and provides health care services to inmates at the Letcher County Jail once a week.

Robin Archer, a clerk at the Jenkins clinic, said Cook is now treating most of the patients seen by the previous doctor, Dr. David Minix.

“She’s really a nice lady,” said Archer. “We’ve very fortunate to have her.”