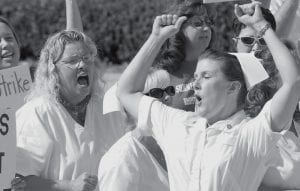 Nancy Newsome, R.N., right, rallied striking nurses from Appalachian Regional Healthcare – Beckley at the State Capitol in Charleston, W.Va., on Monday. The woman on the left is not identified. (AP Photo/Bob Bird)

Clad in red and white and chanting the word “union,” a group of striking nurses vowed Monday to remain off the job until they get a contract with Appalachian Regional Healthcare that meets their terms.

About 75 nurses gathered on the steps of the Capitol to vent their displeasure with ARH, one of the region’s largest health care providers and the owner of seven hospitals in Kentucky and two West Virginia. About 630 nurses in both states walked off the job last week following the expiration of their contract.

“We can last just as long as they can,” said Nancy Newsome, a nurse at ARH’s Beckley hospital. “We’re going to hold together.”

Since the strike began on Oct. 1, ARH has brought in replacement workers.

In the days before the strike, ARH issued its “final offer” to the nurses, which included an initial 2 percent pay raise and flexible schedules, allowing nurses to work 10- and 12-hour shifts.

Pamela Lilly, a nurse at the Beckley hospital, said the offer was a way to break the union. The nurses, she said, rejected it out of concern that it wouldn’t allow them to spend enough time with patients.

“We want a nurse-patient ratio that allows us to give that extra few minutes of conversation,” she said.

Newsome said the nurses’ concerns about overtime and staffing levels came down to the quality of care they can offer.

“Our main cause is safe patient care,” Newsome said. “We want to have nurses work in such a way that we’re not working 16 hours a day.”

Federal mediator Herb Fetty had requested a meeting with both sides Monday in Lexington. Both sides met for about 30 minutes but reached no compromise. The nurses resumed their strike.

“Our last, best and final contract proposal remains on the table and is available for our nurses,” Haynes said in a statement. “We appreciate the nurses who are working and express our thanks to them for their courage and commitment to patient care.”

Before the meeting, ARH officials had indicated that they were meeting with the nurses out of respect to the federal mediator. Haynes had cautioned that the meeting “(would) not constitute a resumption of negotiations.”

The nurses at the Charleston rally were addressed by West Virginia lawmakers and other union groups, who pledged their support.

“They don’t realize we’re a sleeping giant,” said Delegate Barbara Hatfield, D-Kanawha, who is a registered nurse but doesn’t work for ARH. “It’s time to stand up and be heard.”