ARH’s new OB unit ‘second to no one’ 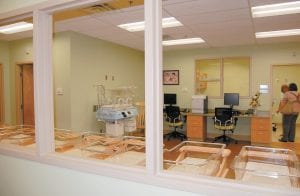 The new wing of the 15,000-square-foot addition of Whitesburg ARH hospital includes a 12-bed nursery.

A small group of Letcher County women began telling administrators of Appalachian Regional Healthcare (ARH) hospital of their ideas to improve the Whitesburg facility about eight years ago.

Danna Richardson, Debbie Hogg, Anne Reynolds and Peggy Childers advocated for a 15,000-squarefoot addition, which includes space for surgery, postpartum, obstetrics and nursery. The women were on hand June 1 to help cut the ribbon for the first phase of an $11 million additon to the Whitesburg hospital.

“We know it has been eight years because I think it has been eight years since Danna’s grandchild was almost born in a hallway due to lack of space there and at that point a group of community people started working on that,” said Dena C. Sparkman, community chief executive officer of the Whitesburg Appalachian Regional Healthcare (ARH) hospital. “ It truly was a teamwork effort. This is a true community project in every sense of the word. It is desired by and supported by our community.” 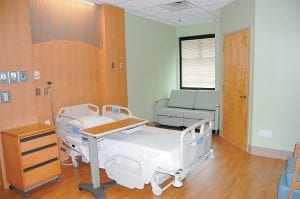 Seen above is a new private room in the new addition which includes space for surgery, postpartum, obstetrics and nursery.

Hogg, chairperson of the Build, Heal, Thrive Campaign, said she remembers when she didn’t think the project was going to happen.

“ Then when the steel went up I thought, we’ve got framework,” said Hogg. “ They have to put something up now. They can’t just leave steel there.”

As construction began Hogg knew the wing was becoming a reality.

“ I remember the first time I stood on the roof and I looked down and I stood there with other members of the committee and I cried because I thought ‘this is happening. We are really getting this’,” said Hogg. “I thought about Dorothy and the Wizard of Oz and we have finally found our golden road and no, Dorothy, you are not in Kansas. You are right here in Whitesburg. And dreams do come true.” 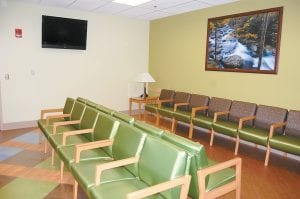 Pictured above is a new waiting area located in the 15,000-square-foot addition of Whitesburg ARH, which includes space for surgery, postpartum, obstetrics and nursery.

Hogg walked through the halls of the new addition and looked at every room last week and was filled with emotion.

“ You have heard a lot about certainly the length of time it has taken for us to be able to complete this project,” said Haynes. “It has been longer than we would have liked. What we try to do is make decisions that are in the best interest of our region and Whitesburg is a most important part of not only our service, but central Appalachia.”

Haynes said the Whites- burg hospital is one of the most successful hospitals in the ARH organization.

“This hospital is known for quality and this new wing and the renovations we’re going to make inside the facility will only enhance our people, our physicians, our nurses, all of our employees to be able to better provide services for our patients,” said Haynes. “In reality I say this a lot, ARH exists for one reason and one reason only. We exist to serve the people of central Appalachia. This project will allow us to do a much better job than we have ever been able to do before. We have done a great job here and will continue to do a great job.”

ARH employees have named the project the Build, Heal, Thrive Campaign and have organized a number of fund-raisers as well as contributing financially themselves. About $1.1 million of the funding comes from various fundraising efforts.

“So many people worked on this effort,” said Sparkman. “People who actually use this space designed this space.”