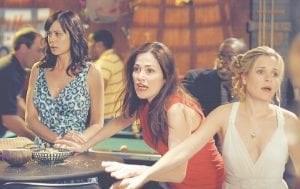 Catherine Bell, Kim Delaney and Sally Pressman are shown in a scene from “Army Wives,” now airing on Sundays at 10 p.m. on Lifetime. (AP Photo/Lifetime)

It’s been called “Desperate Housewives” on an Army base. Lifetime just calls it the network’s signature hit.

As the highest-rated series in the channel’s 24-year history, “Army Wives” premiered strong last summer with 3.5 million viewers and it continued to attract solid ratings throughout its run, becoming the signature drama the network had been hoping for.

“The goal for us was to have a show that would really become Lifetime’s defining show in terms of a drama, not unlike what ‘The Closer’ has done for TNT or ‘Monk’ for USA,” says Lifetime’s president of entertainment Susanne Daniels.

And men were watching, too.

“It has the most co-viewing probably of any particular program on Lifetime,” adds Daniels. “We got a lot of feedback from our viewers (saying), ‘Oh my god, something on Lifetime that my husband wants to watch with me!’ That wasn’t a specific goal of ours at all, but that was a nice benefit.”

On the phone from Charleston, S.C., where “Army Wives” is filmed, creator and executive producer Katherine Fugate calls it a dream scenario: “You just sit there when it first airs going, ‘O.K. does anyone else see what we did?’ But the second season is a different pressure now. It’s, ‘How do you maintain it?”‘

How about start with a surprise conclusion to last season’s finale cliffhanger?

The show is airing on Sundays this summer at 10 p.m. In the June 8 season opener, the band of Army wives – and the lone Army husband – struggled with the emotional aftermath of the bombing at their on-base hangout, the Hump Bar, and the unexpected death of Amanda that followed.

“It (was) all of us dealing with that the first couple of episodes back, maybe three, and then we all start to get back to our lives,” said former “JAG” star Catherine Bell, who plays military wife and mom Denise Sherwood.

Though the series is based on Tanya Biank’s nonfiction book “Under The Sabers: The Unwritten Code of Army Wives,” some in the cast say they’ve informed their characters by the stories of real-life military families – and soldiers – they’ve met at nearby Fort Bragg. As art often imitates life, even recent headline stories – Army wives serving as surrogate mothers and abetting friendly-fire cover-ups – have made their way into the series.

“We certainly try to stay nonpolitical on the show,” says Bell. “We don’t want to get into that in terms of the war and that kind of thing, but of course it’s so much in our face right now … it would be impossible to avoid.”

And yet, says co-star Brigid Brannagh, “no matter how dramatic we can write a story, these (real life Army wives) are living something much more dramatic.

“It’s really amazing that they deal with children and money and really plain issues right alongside really, really dramatic life-and-death issues everyday,” says Brannagh, who plays Delta Force bride Pamela Moran. “It’s the tiny little things: about a wife making a cut-out of her husband – a life sized cut out, for her kids – that kind of just blow you away because they start to really matter when you’re dealing with life and death.”

Brannagh says it’s these extremes that drew her to Steven Bochco’s short-lived Iraq war drama “Over There,” where she also played a military wife, but a vastly different one who hated the Army and had a drinking problem. “But both of them deal with, again, that same life and death,” says the actress.

“She’s a very interesting character because she is a woman in a man’s world. We’re not just talking about the corporate world, we’re talking about the Army!” she says. “So it’s very challenging to let your husband be the leader in the home when, during the day, what you’re doing is telling men what to do and dominating them constantly. And sometimes she’s soft on the military side and too hard in the marriage. That’s what makes her fun to play, ’cause I think she gets it wrong all the time.”

Lifetime upped the episode order for “Army Wives” this season, with 13 shows airing this summer and the final six rolling out by year’s end. For Fugate, it’s the blessing and curse of success.

“If I think about 19 (episodes), my head starts hurting,” laughs Fugate of her increased workload, “so I have to think, ‘I’m on episode four!’ I’m doing this today ….”