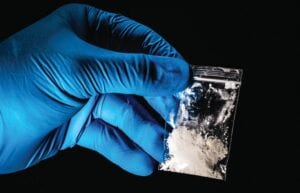 Fentanyl can be sold in pill form, as a powdery substance, or it can be mixed with other powders and sold as heroin.

The Letcher County Sheriff’s Department has charged a Whitesburg man with possessing fentanyl — a powerful, and often deadly painkiller — after he called an ambulance and then refused to go to the hospital.

Letcher County Sheriff Mickey Stines said he believes this to be the first time his office has found fentanyl since he became sheriff in January 2019. Surrounding counties have had cases where fentanyl has been located, and several people in Perry County have died from overdoses of the drug.

Fentanyl is primarily intended as a pain medication and is 50- to-100 times more powerful than morphine. Carfentanil is even more powerful. It is used as a tranquilizer for very large animals, such as elephants. Drug dealers sometimes press it into pills resembling unrelated prescription medications or add it to other powders to sell as heroin. It can easily cause overdoses.

Local agencies several years ago began carrying Narcan, which can reverse the effects of opioids for about 30 minutes, in 2016 as federal law enforcement authorities began warning that carfentanil and fentanyl can pass through the skin and cause police and other emergency responders to overdose simply by touching it. However, opioids have largely disappeared from the streets here due to crackdowns on prescribing pain medications. Methamphetamine has become the drug of choice in this area, and it is not affected by Narcan.

According to a citation in the case this week, the sheriff’s department was called to accompany an ambulance on March 20 to a residence at 100 Butler Rd. for an unknown medical complaint. Deputy James Norris said on his arrival at the home, he saw a plastic baggie with a crystal-like substance inside and a glass pipe lying on the night table. According to the citation, Adam Sturgill, 30, told Norris he needed to go to the hospital for constipation. When the ambulance arrived, Norris said Sturgill wanted it to take him to Pikeville. Since ambulances have to take patients to the nearest appropriate hospital, the crew told him they could not take him to Pikeville, but would take him to Whitesburg. Norris said Sturgill refused to go with the ambulance, so he asked him what was in the baggie.

Sturgill, Norris said, replied that it was “whatever you think it is,” and repeated the same thing when he told him he thought it was methamphetamine.

Norris said he told Sturgill he was under arrest, but Sturgill refused to stand up, and pulled away when Norris grabbed his wrist. He said he pulled Sturgill onto the floor, but he got away and ran to the kitchen where he turned with a raised fist and walked toward Norris.

Norris then fired his Taser, hitting Sturgill in the chest.

Norris said he handcuffed Sturgill and searched him, finding a rolled-up paper with a crystalline substance inside and a baggie with more of a similar substance. He said he tested the substance with a field-testing kit after arriving at the jail, and found it to contain fentanyl.