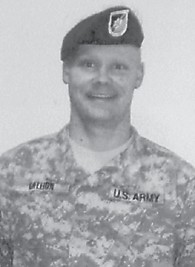 PROMOTED — Ryan Gallion, son of Judy and Shannon Gallion of Abingdon, Va., formerly of Jenkins, was promoted from the rank of captain to major on Nov. 4. He is the grandson of Carl Gallion and the late Lucille Gallion and the late Dr. E.B. Sanders and Hester Sanders, and is a graduate of Jenkins High School and The Citadel in Charleston, S.C. He received his master’s degree from Colorado Technical University in Colorado Springs, Colo. Gallion served one tour of duty in Afghanistan and two in Iraq. While an explosive ordinance disposal commander, he received the Bronze Star and Meritorious Service Medal. He, his wife Kathy, and three-year-old daughter Brooke Micaiah reside in De Ridder, La. (Fort Polk).