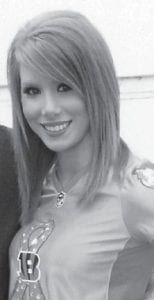 BENGALS CHEERLEADER Sarah Gilliam, 23, of Whitesburg, recently returned from a 10-day tour of Iraq. She was one of eight women chosen to represent the Bengals and the National Football League and to perform for the troops in Kuwait and Iraq. This is her second year with the Bengals, and she has been chosen Cheerleader of the Week both years and was featured in “Girls of the NFL” magazine. She is also involved in a number of charitable events in the Cincinnati area. She is a 2006 graduate of Letcher County Central High School, and is the daughter of Dave and Chesley Gilliam of Whitesburg.