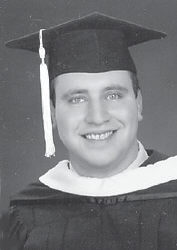 GRADUATE — Jonathan Lloyd Abdoo was graduated from the University of Louisville May 9 with a bachelor of arts degree in sociology with an area of concentration in criminology. He also holds a degree from Anchorage Paramedic Academy in paramedicine and was named a Nationally Registered Paramedic in 2003. During his college career, he became fluent in the modern Arabic language. Abdoo is the son of Lloyd and Teresa Abdoo of Carrollton. His grandparents are Woodford Blair, and Ron and Sue Parks of Whitesburg, and Frank and Jennie Abdoo of Neon. He is living in Florence, where he will be an owner and the general manager of a Holiday Inn which will open in August.