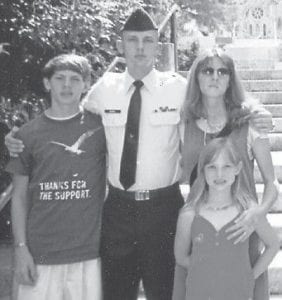 ELIJAH BRUCE CAUDILL of Cowan completed basic training at Lackland Air Force Base in San Antonio, Tex., July 10. He received the marksmanship award and honor graduate award. He was one of only two to receive this award out of the 200 men in his unit. Pictured with him are his brother, Luke, of Blackey, and his mother, Judy, and sister, Hannah, of Cowan. Also attending his graduation were his aunt, Darlene Hurt, and her husband, Earshel, of Blackey. The group’s trip took seven days and they toured Arkansas, Texas, Louisiana, Mississippi, Alabama, and Georgia. The family spent four days with Caudill in San Antonio, touring all the sites. He will now go to Shepherd’s Air Force Base in Wichita Falls, Tex., for 16 weeks’ training in loading bombs onto fighter planes. He is the son of Judy and Robert Caudill of Cowan and Timothy Caudill of Blackey, and the grandson of Bruce and Shirley Gilley of Jeremiah.