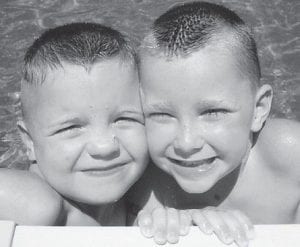 COUSINS — Lawson Rogers (left) turned six years old July 23. He is the son of Adam and Janie Rogers of Lancaster and he has an eight-year-old sister, Callie. His grandparents are Frank and Jeannie Adams of Craft’s Colly. He shared a birthday swimming party at the Whitesburg swimming pool with his cousin Ford Combs, who celebrated his sixth birthday July 24. He is the son of Derrick and Misty Combs of Ice, and has a sister, Farrah, 3. He is the grandson of Burnett and Mary Combs of Little Colley. Both boys are also the grandsons of Jack and Gloria Rogers of Ice.