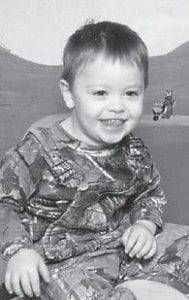 TURNED THREE — Joshua Dylan Letrell Whitaker celebrated his third birthday August 9 with a race car party at Cowan Community Center. His parents are Joshua and Tiffany Whitaker of Mayking. He is the grandson of Jerry and Shelia Hart of Cowan, Shirley Sturgill of Colley and the late David Sturgill, and Denver and Tessa Whitaker of Cowan. He is the great-grandson of Maxie Hampton of Blackey and the late Letrell Hampton.