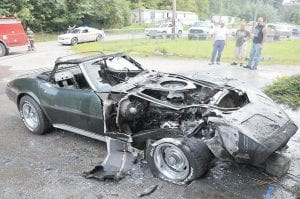 FIRE DESTROYS CLASSIC CAR — A pristine 1974 Chevrolet Corvette was destroyed by fire in Burdine on the evening of Aug. 28. The car, owned by David Rose of Cromona, had just been cleaned and was being prepared as the ride of Magistrate Wayne Fleming, who served as grand marshal for the Jenkins Homecoming Days Parade on Aug. 29. The driver of the car, Fred Rose, noticed smoke coming from under the hood and pulled the car into the parking lot of the vacant Dairy Cheer building near No. 1 Bottom when flames quickly spread from the engine compartment to the interior of the car. Jenkins City Police and the Jenkins Volunteeer Fire Department responded to the call but could only contain the fire and keep it from spreading to the building. The car was a total loss. (Photo by Chris Anderson)