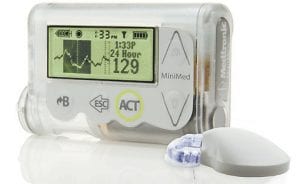 This image provided by Medtronic shows the MiniMed Integrated System device, which doctors are reporting as a major step toward an “artificial pancreas.” (AP Photo)

Doctors are reporting a major step toward an “artifi- cial pancreas,” a device that would constantly monitor blood sugar in people with diabetes and automatically supply insulin as needed.

A key component of such a system — an insulin pump programmed to shut down if blood-sugar dips too low while people are sleeping — worked as intended in a three-month study of 247 patients.

This “smart pump,” made by Minneapolis- based Medtronic Inc., is already sold in Europe, and the U.S. Food and Drug Administration is reviewing it now. Whether it also can be programmed to mimic a real pancreas and constantly adjust insulin based on continuous readings from a blood-sugar monitor requires more testing, but doctors say the new study suggests that’s a realistic goal.

“This is the first step in the development of the artificial pancreas,” said Dr. Richard Bergenstal, diabetes chief at Park Nicollet, a large clinic in St. Louis Park, Minn. “Before we said it’s a dream. We have the first part of it now and I really think it will be developed.”

The study involved people with Type 1 diabetes, the kind usually diagnosed during childhood. About 5 percent of the 26 million Americans with diabetes have this type. Their bodies don’t make insulin, a hormone needed to turn food into energy. That causes high blood-sugar levels and raises the risk for heart disease and many other health problems.

Some people with the more common Type 2 diabetes, the kind linked to obesity, also need insulin and might also benefit from a device like an artificial pancreas. For now, though, it’s aimed at people with Type 1 diabetes who must inject insulin several times a day or get it through a pump with a narrow tube that goes under the skin. The pump is about the size of a cellphone and can be worn on a belt or kept in a pocket.

The pumps give a steady amount of insulin, and patients must monitor their sugar levels and give themselves more insulin at meals or whenever needed to keep blood sugar from getting too high.

A big danger is having too much insulin in the body overnight, when blood-sugar levels naturally fall. People can go into comas, suffer seizures and even die. Parents of children with diabetes often worry so much about this that they sneak into their bedrooms at night to check their child’s blood-sugar monitor.

In the study, all patients had sensors that continuously monitored their blood sugar. Half of them had ordinary insulin pumps and the others had pumps programmed to stop supplying insulin for two hours when blood-sugar fell to a certain threshold.

Over three months, lowsugar episodes were reduced by about one-third in people using the pump with the shut-off feature. Importantly, these people had no cases of severely low blood sugar — the most dangerous kind that require medical aid or help from another person. There were four cases in the group using the standard pump.

“As a first step, I think we should all be very excited that it works,” an independent expert, Dr. Irl Hirsch of the University of Washington in Seattle, said of the programmable pump.