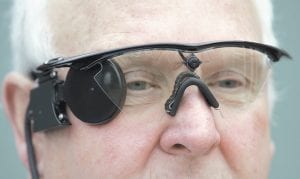 Eric Selby posed for a photograph Saturday with a “sight” camera fitted in a pair of glasses, which works in conjunction with an artificial retina implant called the Argus II fitted in his right eye, enabling him to detect light, in Coventry, England. For two decades, Selby, 68, had been completely blind and dependent on a guide dog to get around. But after having an artificial retina put into his right eye, he can detect ordinary things like the curb and pavement when he’s walking outside. (AP Photo/Martin Cleaver)

For two decades, Eric Selby had been completely blind and dependent on a guide dog to get around. But after having an artificial retina put into his right eye, he can detect ordinary things like the curb and pavement when he’s walking outside.

“It’s basically flashes of light that you have to translate in your brain, but it’s amazing I can see anything at all,” said Selby, a retired engineer in Coventry, central England.

More than a year ago, the 68-year-old had an artificial implant called the Argus II, made by U.S.-based company Second Sight, surgically inserted into his right eye. Dutch regulators are expected to decide within weeks on the company’s request to market the device in the EU. If greenlighted, it would be the first artificial retina available for sale.

The implant works with a tiny video camera and transmitter in a pair of glasses and a small wireless computer.

The computer processes scenes captured by the camera and converts them into visual information in the form of an electronic signal that’s sent to the implant. The device stimulates the retina’s remaining healthy cells, causing them to relay the data to the optic nerve.

The visual information then moves to the brain, where it’s translated into patterns of light that can take the shape of an object’s outline. Patients need to learn how to interpret the flashes of light; for instance, they might decode three bright dots as the three points of a triangle.

The implant is intended only for people with a specifi c type of inherited retina problem, who still have some functional cells. They must have previously been able to see and their optic nerve must be working. About one in 3,000 people are blind due to one of this group of hereditary diseases, called retinitis pigmentosa, and might potentially benefit from the artificial retina.

The device comes with a hefty price tag — about $100,000. In Britain, the national health service sometimes pays for expensive new technologies for a small number of patients, said Lyndon da Cruz, one of the doctors who tested the artificial retina at Moorfields Eye Hospital in London.

He said if the artificial retina allows patients to be more self-sufficient, the implant could turn out to be cheaper than governments paying for higher levels of health care or in-home care for patients.

So far, about 40 people have gotten the artificial retina since 2002 and some patients have seen well enough to identify objects, shapes, or even read large print during their participation in trials.

The implant’s maker has applied to the Netherlands’ medical devices regulator for marketing permission. The company is also in talks with the U.S. Food and Drug Administration about the kind of tests needed to secure the retinal implant’s approval in the United States.

“The device is currently very crude, but it’s impressive that some patients have been able to read large fonts,” said Daniel Palanker, who works in opthalmology and experimental physics at Stanford University, and is not connected to the Argus II.

He and colleagues are developing another artificial retina implant that delivers images to the eye via pulses of infrared light, though they are years away from having a commercial product.

“It’s just remarkable that we’ve gone from having no cure to blindness to a situation where we can restore sight to some extent,” Palanker said.

There are a handful of competing retinal implant projects worldwide. Last year, Eberhart Zrenner at the Centre for Opthalmology in Tuebingen, Germany and colleagues published research about their implant, which also depends on patients’ remaining working retinal cells. Only 11 people have received the device so far, but one reported being able to see his girlfriend’s face while another reported seeing a duck in a meadow. Zrenner hopes the device will be available in two years.

Gregoire Cosendai, senior director of European Operations at Second Sight, said the Argus II implant’s success depends largely on how adept patients are at decoding the flashing lights the device produces. He said the implant isn’t meant to replace guide dogs or canes at the moment, but may improve patients’ coordination and help them with daily tasks like cooking.

“The way these implants work is they plug into what’s left of the retina, so that limits just how much you can reproduce,” said da Cruz. He predicted the device would improve dramatically in the next decade.

“The big breakthroughs — making a device you can sit on the retina which doesn’t kill it and proving it works for years — have already been made,” he said. He said it would be much easier to refi ne the implant and improve the quality of what patients see. Second Sight is already developing a new version of its retinal implant that will soon be tested.

Selby says his artificial retina allows him to see certain shapes and shades of black, white and gray. He mostly uses it to help navigate his walking route when he goes outside.

“I’m only seeing a fraction of things but it does still help,” he said. Selby lost his sight nearly 20 years ago due to an inherited eye condition and hopes his grandchildren and future generations might benefit from his experience with the implant.

“It’s like when people were first trying to fly to the moon,” he said. “Nowadays they’re sending people to the moon and into space, but they had to start off with a propeller engine … For artificial eye implants, it could be a whole different ballgame in a few years.”