Artist gets inspiration from Speak Your Piece

Work now on display at Summit City in Whitesburg 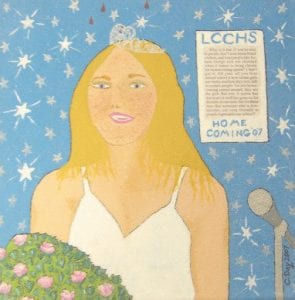 A NEWSPAPER CLIPPING from The Mountain Eagle’s Speak Your Piece is incorporated into this painting titled “Carrie” by Letcher County artist Chris Day. The painting is based on a comment from a young girl that appeared in Speak Your Piece earlier this year.

Words submitted to Speak Your Piece are being translated to canvas by a Letcher County artist.

“Speak Your Piece Unto the Lord” is the title of an exhibit of paintings by Jeremiah artist Chris Day, which are now on display at Summit City on Main Street in Whitesburg. The paintings were inspired by comments telephoned or e-mailed to Speak Your Piece, a reader-comment feature which has appeared in The Mountain Eagle since 1983. The exhibit will be on display daily through March 4.

Day, who graduated from the University of Kentucky with a degree in fine arts in 1985, said each of the paintings was triggered by a comment to Speak Your Piece he found “humorous.”

“Some of those comments trigger pictures of what that person is trying to say,” Day said during a reception marking the exhibit’s opening on January 4.

Day said he is a fan of Speak Your Piece because “a lot of these problems you can relate to yourself and see that you’re not the only one. We all have our life’s little problems and if we didn’t have Speak Your Piece we would lose our minds. Like one piece says, we’d all end up in the psych ward at Hazard.” 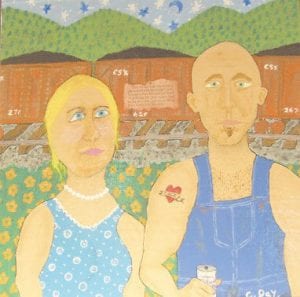 LETCHER COUNTY GOTHIC is the title of this painting by artist Chris Day. It is now on display at Summit City in downtown Whitesburg.

After graduating from UK, Day moved to Charlotte, N.C., where he found work with a child’s photography company. Because of promotions which required him to move around the U.S., Day said he quit painting for a number of years. He said he got the urge to pick his brushes up again after moving back to Letcher County and reading Speak Your Piece.

Some of Day’s most recent paintings have been exhibited in New Mexico and Arizona.

Day lives in the community of Blair Branch. In addition to the exhibit at Summit City, some of his work can be seen at www.ChrisDayArt.com