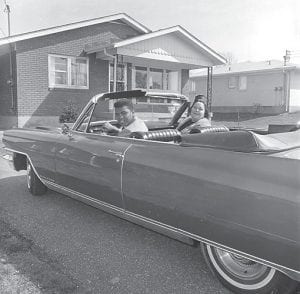 In this April 4, 1963 file photo, heavyweight boxer Cassius Clay is seen with his mother, Odessa Grady Clay, in a car outside their home in Louisville. (AP Photo/H.B. Littell)

Long before his dazzling footwork and punching prowess made him a threetime world heavyweight boxing champion known as Muhammad Ali, a young Cassius Clay honed his skills by sparring with neighborhood friends and running alongside the bus on the way to school.

The man who became the world’s most recognizable athlete was a baby sitter, a jokester and a dreamer in the predominantly black West End neighborhood of Louisville where he grew up and forged lasting friendships while beginning his ascent toward greatness.

Now, as the iconic boxer slowed by Parkinson’s disease prepares to turn 70 next week, he’s coming home for a birthday bash at the downtown cultural center and museum that bears his name. The private party Saturday night will double as a fundraiser for the 6-yearold Muhammad Ali Center, which promotes ideals of tolerance, respect and individual achievement. The birthday party will highlight a weeklong extended tribute to the city’s favorite son whose name and face emblazon buildings and street signs.

Those who knew him before he developed his famous ringside persona — the brash predictions followed by rapid-fire punches that backed up his taunts — remember a happy-golucky kid with a ready smile who had a serious side, aspiring to show his mettle as a fighter.

Ali’s boyhood neighbor, Lawrence Montgomery Sr., 78, was one of the first to feel the sting of the young boxer’s jabs. At the teenage boy’s request, Montgomery held up his hands and Ali popped them with punch after punch.

Montgomery saw early glimpses of the boxing legend’s bravado that earned him the “ Louisville Lip” nickname.

“He told me then that he was going to be the heavyweight champion of the world, and I didn’t believe him,” Montgomery told The Associated Press. “I told him, ‘Man, you better get that out of your mind.’ But he succeeded. He followed through.”

Early on, Ali’s neighbors and classmates saw the work ethic that enabled him to defeat the likes of Joe Frazier, George Foreman and Sonny Liston in epic bouts that sealed his reputation as an all-time great.

Instead of riding a bus to school, Ali raced it in early- morning workouts that stretched for miles.

“ He would jog and of course we’d pass him up,” said Shirlee Smith, 69, who graduated with Ali from Louisville Central High School in 1960. “Then we’d stop at every corner to pick somebody up and he’d pass us up. And he’d laugh and wave at us all the way to school.”

Ali and the bus usually arrived at school about the same time, she said, but Ali never seemed winded.

“It didn’t faze him in the least,” Smith said.

Some early mornings, when Montgomery arrived home from his overnight shift at the postal service, he would see Ali running in heavy boots toward a neighborhood park and back — a 5-mile roundtrip.

Ali’s introduction to boxing was spurred by a theft.

His new bicycle was stolen when Ali was 12. He rode the bike to a community event to get free popcorn and candy. When it was time to go home, the bike was gone. Wanting to report the crime, the shaken boy was introduced to Joe Martin, a police officer who doubled as a boxing coach at a local gym. Ali told Martin he wanted to whip the culprit. The thief was never found, nor was the bike, but soon the feisty Ali was a regular in Martin’s gym.

Victor Bender was an aspiring boxer when he and Ali began a lasting friendship when both were 12. The two became sparring partners as Ali slowly began turning his raw natural abilities into boxing skills.

“ He was developing punches back then,” Bender said.

While Bender shifted his attention to basketball and football, becoming a standout at Central High, Ali developed into a top amateur boxer, winning two national Golden Gloves championships by the age of 18.

Even in his early days, friends say, the gangly Ali aspired to become a heavyweight. The summer after graduating from high school, Ali won a gold medal at the 1960 Olympics in Rome.

Away from the gym and ring, though, Ali was known for his fun-loving side and loyalty as a friend.

Unlike the brash boxer whose face become a fixture on television years later, Ali was a bit shy in school, Smith said.

Ali’s self- confidence soared as his career took off, but much of the brashness was aimed at garnering attention, said Gordon Davidson, the attorney for the group of Louisville businessmen who sponsored Ali in the early years of his professional career.

“As far as this “I’m The Greatest,’ all of that was what I’ll call sideshow,” he said. “He could turn it on and turn it off when he wanted to.”

“I just remember having to sit down and be quiet,” she recalled.

Montgomery’s father said Ali refused to charge him for babysitting his children.