As bear population grows, more are being killed on roads while seeking food 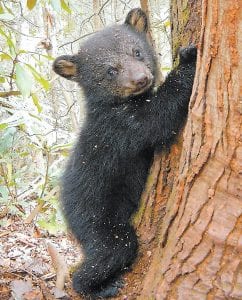 A bear cub makes his mark on a tree on Pine Mountain in Letcher County. Mother bears have two to three cubs a year, on average, but at least one had four this winter. Biologists have seen as many as five in a litter. (Photo by Sean Murphy, University of Kentucky)

Drivers in eastern Kentucky by this time are all too familiar with the sight of deer carcasses and mangled auto parts lying on the roadside after unhappy encounters between whitetail deer and speeding cars.

But if things keep going the way they are, drivers might soon become more familiar with a larger, heavier, more damaging roadkill — black bears.

The human population of Letcher County might be decreasing, but the bear population is most likely increasing, and so far this year four bruins have been killed on the highways here. Residents have reported mother bears with three to four cubs each all over the county, and scattered garbage and broken beehives are becoming a weekly, if not nightly, occurrence.

Whitesburg’s assistant chief of police, Justin Hunsucker, had a firsthand experience with bears after a cub was hit by a car April 20 on Kentucky 15 near Premium. Two cubs were hit that day. One was killed, but the other ran away into the woods before he got there. The car that hit them was gone, too.

The mother bear, however, was still at the scene, and she wasn’t happy. She was growling and “huffing” nearby when Hunsucker got out of his car.

“You could hear her over the hill, so I stayed in the car as much as I could, too,” he said.

Eventually the mother bear left, and the Department of Fish and Wildlife let a local resident have the dead cub.

Three other bears have been killed by cars along U.S. 119, and Hunsaker said bears raid Dumpsters at the state Department of Families and Children and at the Earnest Cook Park nearly every night, pulling garbage up the hill and into the woods.

So what are residents to do?

“Put this down,” state Conservation Officer Homer Pigman requested. “Put your garbage up.”

Pigman said the population has to be increasing, and people are going to see more bears. They have to deal with it by locking up garbage in an outbuilding or a container bears can’t get into, and not putting it out to be picked up until the morning the garbage truck runs. That’s especially important when natural food sources are scarce.

“When these blackberries and raspberries get ripe, it will slow down, and then in August, it’ll pick back up again,” Pigman said.

“Bears are real easy to live with, if the attractant has been secured,” said Jayson Plaxico, a bear biologist with the Kentucky Department of Fish and Wildlife Resources in Prestonsburg.

That means electric fences around beehives, livestock pens, chickens, or anything else you don’t want the bears getting into. Plaxico said there have been 20 reports of bears either killed on the highway or causing trouble for residents in Letcher County so far this year. But, he said in most cases it’s not the bears’ fault.

“We’ve had a lot of instances where people have fed these bears until they’re no longer acting wild,” he said.

That’s dangerous, Plaxico said, because bears that would normally run from people begin to see them as a source of food, and will walk right up to them. He said the best thing to do if you see a bear, even if it’s far away, is start making a lot of noise, and make yourself look bigger by raising your arms over your head. In 25 years of tagging bears and working with them, Plaxico said he’s never once felt threatened by a bear because he has always let them know he’s around.

Plaxico said no one really knows how many bears there are here. Bears have been studied from the Cumberland River section of Letcher County into Harlan and Bell counties since 2001, but from Whitesburg to Elkhorn City, there has been very little study. But, considering the Hensley Pine Mountain Wildlife Management Area is a refuge for bears, and the number of reports the department receives from the Mayking and Jenkins areas, the population “has to be increasing.”