As coal jobs vanish, miners are looking for new careers 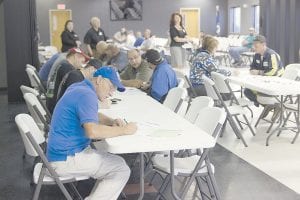 In this photo provided by the Eastern Kentucky Concentrated Employment Program Inc., miners seeking employment with Patriot Coal in western Kentucky attended a job fair in Hazard in September. The job fair was organized by EKCEP. As job numbers in eastern Kentucky coal mines decline, some miners pursue mining jobs in other areas of the state.

When 61-year-old Glen Turley lost his job as a coal company truck driver, he did what many people his age shudder to consider: He went back to school to find a new career.

Turley took advantage of free classes offered to laid off miners and got certified as a HVAC technician. But like many of the jobs taught at career centers in rural West Virginia, Kentucky and Virginia, he doesn’t make nearly as much money as he once did.

“ There’s just no alternative to coal in the South that pays as well,” Turley said. “In the South, it’s dismal right now.”

Thousands have lost their jobs in the coal industry and these free classes funded by federal money can only help a fraction of them.

Turley was let go in 2012 by a subsidiary of Alpha Natural Resources. He now works as a truck driving instructor and runs a side business — Turley Enterprises — doing HVAC work.

Brett Dillon, a former coal miner, is director of the United Mine Workers of America’s West Virginia Career Center in Beckley, W.Va. The center provides former coal workers with training in fields such as trucking and natural gas — an industry that has expanded rapidly as the federal government sought to curb carbon emission from coal-fired plants.

The center has registered 500 former coal workers since 2012. Of that figure, Dillon said “a good percentage have gone back to work,” without providing more specific figures.

Much like similar programs in Virginia and Kentucky, funding comes through National Emergency Grants doled out through the Workforce Investment Act. West Virginia received more than $5 million for displaced mine workers in April, adding to $1.8 million it received in August 2012.

When Christopher Armstrong, 22, lost his job as a coal company diesel mechanic, his mom nudged him toward the career center. He now has a Class A trucking license — a qualification he said helped him land a job as a mechanic with the City of Charleston.

Armstrong used to make about $20 an hour, but now he tops out at $15 an hour. He said a lot of former coal workers are scared to think about a new career.

“They say, ‘I’m going to have to go to school to go into a whole other field that I don’t even know about?’ They’d rather just go back to the mines,” he said.

James Douglas Beverly, 30, of Hazard, Kentucky, worked in a TECO Energy coal mine for nearly five years after leaving the U.S. Coast Guard. The money was great, he said — $1,000 per week. With a small child and a wife working at a convenience store, he knew he couldn’t afford to be unemployed. So when he was laid off, he took emergency medical training classes on his own dime and eventually got work as an EMT. The pay was much less — $700 every two weeks — but it was better than nothing.

This year, he heard about a coal miner re-education program that’s part of the Eastern Kentucky Concentrated Employment Program. It’s an NEG-funded program much like West Virginia’s career center.

Beverly is still an EMT, but now, in his spare time, he’s taking free classes to work on electrical power lines. Once he graduates, he said he’ll be in line for jobs that pays comparably to his old job in the coal mine.

According to the program, eastern Kentucky has lost a total of 8,000 coal jobs since 2009; as of June this year, the organization had helped about 900 find new jobs.

“There are jobs outside the coal mine,” he says. “You might have to jump through some hoops and take some classes to get them. But you can find a new field.”