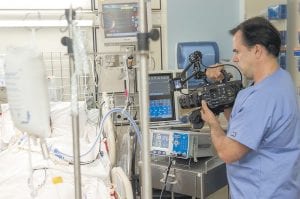 Dr. Angelo Volandes films a patient for videos he develops that educate families about end-of-life care options, such as CPR. The Institute of Medicine is pushing for more patients to have conversations with their doctors about their end-of-life wishes, and programs such as Volandes’ videos are one tool to get the discussion started. Volandes, a Harvard internist, creates videos that lay out facts about such things as CPR and feeding tubes as a tool to help doctors get the conversation going with patients. (AP)

Dr. Angelo Volandes remembers performing rib-cracking CPR on a frail elderly man dying of lung cancer, a vivid example of an end-of-life dilemma: Because his patient never said if he wanted aggressive care as his body shut down, the hospital had to try. He died days later.

“This is about patient empowerment,” said Volandes, who describes his program in a new book aptly titled “The Conversation.”

Most Americans say they’d prefer to die at home, with treatment to free them from pain, but the prestigious Institute of Medicine says the reality too often is unwanted care and not enough comfort. One main reason: Doctors have a hard time discussing dying and patients don’t know what to ask. Now the institute is recommending changes in the health system to help patients — not doctors or circumstances — dictate their care, and it all starts with some straight talk.

“These conversations should be part of a life cycle, not just at the end of life,” said Dr. Philip Pizzo of Stanford University, who cochaired the institute’s panel that is holding meetings on how to implement the recommendations.

“Regardless of whether an individual is choosing more or less, both ends of that spectrum are important and we should honor preferences.”

Already some programs are under way to jumpstart the discussions. VitalTalk trains doctors for emotional conversations such as whether it’s time to stop cancer chemotherapy, and how to ask what patients value most for their remaining time.

“ Doctors know what they should do, they just don’t know how to do it effectively,” said VitalTalk co-developer Dr. Anthony Back, a University of Washington oncologist.

And health facilities can license Volandes’ videos to show families what options ranging from CPR to feeding tubes to hospice involve, before they talk with the doctor.

For example, one video explains that if CPR is attempted, you also may be put on a ventilator — a tube down your throat that pushes air into your lungs, preventing eating or talking. In a matter-of-fact manner, it shows health workers inserting that tube in a mannequin and, briefly, a real patient lying sedated and intubated.

In carefully controlled studies, Volandes found patients were less likely to opt for aggressive end-oflife care after seeing the videos than if someone just described their choices.

“If one of our members makes a conscious decision that, ‘I want to fight until my last dying breath,’ we’re supportive of that,” said Hilton Raethel, chief health officer of HMSA, the not-for-profit Hawaii Medical Service Association. “But we want that to be a choice you make as opposed to, it’s something that’s imposed on you.”

These decisions are much more complicated than a checklist, said Dr. Diane Meier, an Institute of Medicine panelist and director of the Center to Advance Palliative Care at New York’s Mount Sinai Medical Center.

Conversations are critical because of the “it depends” factor. Maybe you’re sure you won’t want to be on a ventilator once your cancer becomes advanced. But say you catch a treatable pneumonia in the meantime. Would a few days on a ventilator be worth it then?

“Advance care planning is a process and people change their minds all the time,” Meier said. “Those nuances are very customized, patient-specific.”

Yet few medical schools train doctors in them.

“ The tendency of all health professionals, including me, is to just keep talking” when delivering bad news, said VitalTalk’s Back, who calls it “explainaholic syndrome.”

His program lets doctors practice how to stop and acknowledge patients’ emotions, ask about what’s most important to them, and then explore options that match those values. In addition to courses, VitalTalk offers an app for doctors to use as a refresher before a difficult conversation.

Among the institute’s recommendations are for the establishment of quality standards and payment systems that encourage advance care planning; Medicare is considering reimbursement for such planning. Meanwhile, the institute’s Web site points families to online resources — bit.ly/199Hgqe — and has created a public service announcement to educate consumers.

Back in Honolulu, Lena Katekaru wasn’t sure how much her 81-year-old father understood when an emergency room doctor, citing his frailty and other illnesses, recommended against aggressive care for his esophageal cancer. She remembered her mother dying in an intensive care unit without the family having discussed her wishes, and didn’t want a repeat of the uncertainty.

A nurse showed Katekaru’s father one of Volandes’ videos, translated into his native Japanese, explaining treatment for pain and symptoms versus progressively aggressive care. Later, her father put his wishes in writing.

“I don’t want to choose for him,” said Katekaru, who at 52 says she should consider these conversations, too. “You don’t want to burden your family.”