As player and coach 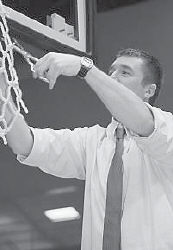 When Tolliver walked onto the Diddle Arena floor on March to help coach Rowan County in the Girls’ Sweet Sixteen, he became the first Letcher County male to both play and coach in a state high school basketball tournament. And he did it in just his first year of coaching.

Although the 16th Region champion Lady Vikings lost to 14th Region champion Breathitt County in the tourney’s opening round, the accomplishment they – and Tolliver – were able to achieve just by getting to Bowling Green was remarkable given the turmoil the team faced at the beginning of the season.

Tolliver’s journey from Whitesburg to Morehead and on to the Western Kentucky University gym in Bowling Green began in 2002, when he finished his playing days at Whitesburg High School after helping lead the Yellowjackets to the quarterfinals of the Sweet Sixteen. After graduating from Morehead State University in 2007, Tolliver was hired to teach social studies at Rowan County High, where he was also expected to assist former Lady Vikings head coach Troy Lee Thomas.

Tolliver’s immediate future was soon left hanging in the air, however, when Thomas, also a Letcher County native, resigned before the 2007-08 season started for health reasons.

Tolliver picks up the story there: “I still decided I wanted to help, and coach John High was hired. He used to coach Whitesburg’s girls in the ’80s and ’90s, taking them to several state tournaments.

“When I heard this I was very excited. I was going to get the experience of coaching under the winningest girls’ basketball coach in the state. Conditioning and open gym started and things seemed to be going good. However, the day before our first scrimmage he resigned. The administration and him couldn’t come to an agreement on some things. That left Scott Tackett, the assistant coach at the time, as the head coach and me as the assistant coach the day before our first scrimmage.”

Tolliver helped coach the Lady Vikings to 27 wins this season against only six losses. Rowan County had a 16-0 mark while playing inside the 16th Region and, according to Bluegrass Preps, finished the year as the state’s 18th best team.

Tolliver also served as head coach of Rowan County’s junior varsity team, which finished the season with a 17-2 record and was also unbeaten in regional play.

“Not many coaches get such a great opportunity in their first year,” said Tolliver. “I see that and I am grateful to get such a break.”

Tolliver said coaching in a state championship tournament provided “a different side and perspective of basketball” than he saw as a player on a team led by future Transylvania University star Brian Howard. Tolliver’s high school career ended on March 15, 2002, when Whitesburg was defeated in Lexington’s Rupp Arena by a North Hardin High School team led by future University of Kentucky star quarterback Andre Woodson.

“Stepping onto Rupp (Arena’s floor) as a player is the pinnacle of any high school basketball player’s career and is a feeling that can never be replaced,” said Tolliver. “The excitement is unmatched. Knowing that it could be your last game ever and the last time you could play with your teammates weighs on you. You want to do everything perfect – make the right passes, take the right shots, play the best defense of your life.

“As a coach,” Tolliver continued, “the emotions are a little different. The nervousness is still there but in a different way. You hope you can put your team in the best possible position to win. You are the one making the calls, not executing them. You are the one preparing the team, doing the research, watching the film, making the scouting reports. If you lose you feel like it is all your fault. You think maybe I should have done this or maybe we should of done that. It’s all on your shoulders.”

Tolliver said he decided on a career as a basketball coach while he was still in high school.

“I always knew that I wanted to coach, since I was in high school,” he said. “I have played basketball my whole life and don’t know what I would do without it. I was a student of the game for so long, and now I have the opportunity to share what I know and what I have learned with other players, both on and off the court.”

Like most first-year coaches, Tolliver has no way of knowing what jobs lie ahead. One certainty, however, is that he hopes to continue to have a part in a winning basketball program.

“I don’t know what my future holds, but I sure hope it involves more regional championships and even state championships,” said Tolliver. “I have very high hopes for our team next year as well. We have three junior starters returning and some very promising sophomores and freshmen coming up. One of our juniors, Amber Riddle, was district and regional MVP. The other two were on both all-district and all-regional teams. I would expect us to have an equal if not more successful season next year. There is a very promising future for these girls.”