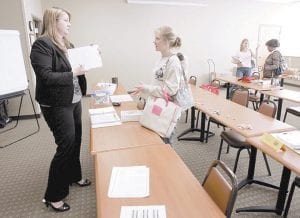 Instructor Jessica Leonard, left, talked with Alison Ross after a class at Fort Campbell, Ky. The class is for spouses of soldiers, and helps them to deal with Army life. (AP Photo)

EDITOR’S NOTE – With troops fighting on foreign soil since late 2001, the United States is learning about the long-term toll of modern war on the home front. In the first of a threepart package of stories, The Associated Press examines some of the consequences for military families.

Far from the combat zones, the strains and separations of no-end-in-sight wars are taking an evergrowing toll on military families despite the armed services’ earnest efforts to help.

Divorce lawyers see it in the breakup of youthful marriages as long, multiple deployments in Iraq and Afghanistan fuel alienation and mistrust. Domestic violence experts see it in the scuffles that often precede a soldier’s departure or sour a briefly joyous homecoming.

Teresa Moss, a counselor at Fort Campbell’s Lincoln Elementary School, hears it in the voices of deployed soldiers’ children as they meet in groups to share accounts of nightmares, bedwetting and heartache.

“They listen to each other. They hear that they aren’t the only ones not able to sleep, having their teachers yell at them,” Moss said.

Even for Army spouses with solid marriages, the repeated separations are an ordeal.

“Three deployments in, I still have days when I want to hide under the bed and cry,” said Jessica Leonard, who is raising two small children and teaching a “family team building” class to other wives at Fort Campbell. Her husband, Capt. Lance Leonard, is in Iraq.

Those classes are among numerous initiatives to support war-strained families. Yet military officials acknowledge that the vast needs outweigh available resources, and critics complain of persistent shortcomings – a dearth of updated data on domestic violence, short shrift for families of National Guard and Reserve members, inadequate support for spouses and children of wounded and traumatized soldiers.

If the burden sounds heavier than what families bore in the 20th century’s longest wars – World War II and Vietnam – it is, in some ways. Today’s wars entail a deployment pattern of two, three, sometimes four overseas stints of 12 or 15 months – a schedule virtually unheard of in the past.

“It’s hard to go away, it’s hard to come back, and go away and come back again,” said Dr. David Benedek, an Army psychiatrist. “That is happening on a larger scale than in our previous military endeavors.”

Almost in one breath, military officials praise the resiliency that enables most of these families to endure while acknowledging that the wars expose them to unprecedented stresses and the risk of long-lasting scars.

An array of studies by the Army and outside researchers say that marital strains, risk of child maltreatment and other family problems worsen as soldiers serve multiple combat tours.

For example, a Pentagon-funded study last year concluded that children in some Army families were markedly more vulnerable to abuse and neglect by their mothers when their fathers were deployed in Iraq and Afghanistan.

In Iraq, the latest survey by Army mental health experts showed that more than 15 percent of deployed married soldiers were planning a divorce, with the rates for soldiers at the late stages of deployment triple those of recent arrivals.

For the Army, the challenges are staggering as it furnishes the bulk of combat forces. As of last year, more than 55 percent of its soldiers were married, a far higher rate than in the Vietnam era. The nearly 513,000 soldiers on active duty collectively had more than 493,000 children.

Jessica Leonard at Fort Campbell says family support programs there have improved since her husband’s first combat tour. Yet she’s convinced that domestic violence and divorce are rising at the base, which is home to the 101st Airborne Division.

“Infidelity is huge on both sides – a wife is lonely, she looks for attention and finds it easier to cheat,” she said. “It does make even the most sound marriages second-guess.”

She sees evidence of depression and lower morale among soldiers returning for two-week breaks.

“They come home and find that problems are still there,” she said. “Instead of a refreshing Rand R, a nice little second honeymoon, it’s battle for two weeks.”

There have been some horrific incidents shattering families of soldiers back from the wars – a former Army paratrooper from Michigan charged with raping and beating his infant daughter; a sergeant from Hawaii’s Army National Guard accused of killing his 14-year-old son as the boy tried to save his pregnant mother from a knife attack by the soldier.

In one wrenching case, a recently divorced airman who served in Iraq chased his ex-wife out of military housing with a pistol in February before killing his two young children and himself at Oklahoma’s Tinker Air Force Base. Tech. Sgt. Dustin Thorson’s former wife had sought a protection order against him, saying he threatened to kill the children if she filed for divorce.

Officials at Tinker, while confirming that Thorson had received mental health care, wouldn’t say whether those problems related to his Iraq service.

His brother, Shane Thorson, a sheriff’s deputy from Pasco, Wash., also served in Iraq. He has no doubt Dustin’s war experiences contributed to the tragedy.

“He didn’t want to go – he was afraid, but he had a job that he’d signed up to do and he went and did it,” Shane said. “I do think it led up to everything that happened. … It opened up a world of death and chaos and uncertainty.”

Shane, who is married and has an 8-year-old daughter, is sure the deployments have damaged many marriages.

“My wife and friends, they tell me I’m not the same person before I came back – not as loving,” he said. “You really realize how insignificant you are in this world.”

Overall, the Army says its domestic violence rates are no worse than for civilians. However, critics say there is a lack of comprehensive data reflecting the impact of war-zone deployments.

The Miles Foundation, which provides domestic violence assistance to military wives, says its caseload has more than quadrupled during the two latest wars.

“The tactics learned as part of military training are often used by those who commit domestic violence,” said the foundation’s executive director, Christine Hansen, citing increased proficiency with weapons and psychological tactics such as sleep deprivation.

Jackie Campbell, a nursing professor at Johns Hopkins, served on a Defense Department task force examining domestic violence. She says the military’s data on the problem is based only on officially reported incidents, and should be supplemented with confidential surveys – such studies were conducted before the Iraq war.

“They have no clue what the rate of domestic violence is – they only know what’s reported to the system, and that’s always lower than the actual rate,” Campbell said. “I’m disappointed. … I know the system is stressed to the umpteenth degree. But I do think they need to do the right kind of research so they can keep up with this.”

One complication is the high rate of post-traumatic stress disorder among service members returning from war. Campbell said PTSD raises the risk of domestic violence, yet many soldiers and their spouses don’t want to acknowledge problems for fear of derailing the soldier’s career.

At Fort Campbell, Family Advocacy Program director Louie Sumner – who’s in charge of combatting domestic violence – encourages people to report suspected abuse. But Sumner also said his program, though one of the Army’s best, should do more outreach with the majority of families who live off the huge base, in subdivisions, apartments and trailer parks where couples’ troubles may go undetected.

“When the soldier goes overseas three, four times, the fuse is a lot shorter,” Sumner said. “They explode quicker, and the victim gets hurt worse.”

A Rand Corp. study published in April concluded that military families’ divorce rate between 2001 and 2005 was no higher than during peacetime a decade earlier. But the study didn’t reflect the third and fourth war deployments that have strained many marriages since 2005.

Maj. Mike Oeschger gets a closer look at struggling marriages than he’d like in his role as rear detachment commander for the 1st Brigade Combat Team at Fort Campbell. Dealing with family crises while the brigade is in Iraq is a key part of his job.

A husband and father who served in Iraq him- self, Oeschger has seen infidelity in multiple forms. Some wives at the base are preyed on by men who know the husbands are overseas. Some war-zone soldiers pursue extramarital affairs over the Internet.

Oeschger would rather stay out of his soldiers’ personal lives, but that’s not always an option.

“Once it starts to affect performance, I’m involved and want to know every detail,” he said. “It’s miserable stuff … but it’s my job.”

Col. Ronald Crews, a chaplain called from the reserves to help with family counseling, said long-distance marital crises became so severe for two Fort Campbell soldiers recently that they were sent home from Iraq to handle them.

“Their commander said they wouldn’t be of any use until the problems were resolved,” Crews said. The soldiers were required to meet with him weekly. One returned to Iraq, the other did not.

For some time, chaplains have been conducting marriage workshops for soldiers back from deployment. Now, says Crews, married soldiers also are required to attend such workshops before they leave.

Medical personnel, meanwhile, have been directed to be more active in screening spouses of deployed soldiers for depression. More than 1,000 “family readiness” assistants are being added, as are dozens of marriage and family therapists.

Stacy Bannerman, whose husband served with the Washington State National Guard in Iraq, says many Guard members and reservists don’t get adequate treatment when – like her husband – they are diagnosed with PTSD.

“We don’t have the support networks that active duty does,” Bannerman said. “There’s very little attention paid to reintegration – bammo, you suddenly go back to your civilian life. I haven’t spoken to anyone who hasn’t experienced some degree of stress on a marriage.”

Her own marriage was nearly one of the casualties. She and her husband, Lorin, separated for more than a year, but now are working at reconciliation even as he faces a second deployment to Iraq in August.

Lee Rosen, a lawyer who’s handled many military divorces, says the breaking point for many couples often arrives with a second or third deployment. Yet many marriages don’t survive even a first deployment.

While 1st Lt. Mike Robison was serving in Iraq in 2003-04, his wife, Candance, depicted him as a “good, brave man” in a letter she wrote to President Bush. But the marriage fell apart after Robison’s return to Texas. Candance said they argued over her role managing the household and how he treated her 10-year daughter from a previous relationship.

“It absolutely changed him,” Candance said. “I still struggle every day – that year has affected every single aspect of my life.”