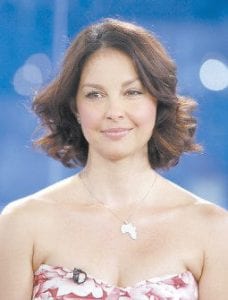 Ashley Judd was photographed in June 2008 during an appearance on the NBC “Today” television program in N ew York.(AP Photo)

Actress Ashley Judd added her voice this week to calls to stop a destructive mining practice that blasts away mountaintops to unearth coal.

The Kentucky native was among some 500 demonstrators who gathered Tuesday outside the state Capitol for a rally against socalled mountaintop removal coal mining.

Judd told the protesters, who waved placards reading “Save The Mountains” and “Got Pollution? Thank Coal,” that she saw “barren moonscapes” and “nothingness” on a visit last September to the eastern Kentucky mountains.

“Nothing, absolutely nothing could have prepared me for the sheer trauma of seeing mountaintop removal coal mining sites,” she said, adding “I flew over barren moonscapes.”

“Where once were ancient, verdant hills, or the most biodiverse forests in the whole of North America, I saw nothingness,” the actress declared.

It is only the latest cause for the 40-year-old actress, who was born in the northeastern Kentucky city of Ashland.

An actress whose screen credits include “De-Lovely” and “Kiss the Girls,” Judd also has called on world leaders to end human trafficking and has used her celebrity status to focus attention on HIV/ AIDS prevention.

Judd also is helping the group Defenders of Wildlife in an animal rights campaign against Alaska’s predator control program, which allows wolves and bears to be killed from aircraft.

Throughout Appalachia, environmentalists have been fighting mountaintop coal removal, holding protests, filing lawsuits against federal agencies and coal companies, and pushing for legislation at the state and federal level to ban the practice.

Archie Fields of Whitesburg, a former coal miner and a member of the environmental group Kentuckians for the Commonwealth, said he’s hopeful Judd’s endorsement will sway Kentucky lawmakers to take action.

“It should be stopped,” Fields said. “It’s pitiful what they’re doing.”

However, similar bills have failed in the Kentucky legislature each of the past four years.

U.S. Rep. John Yarmuth, DLouisville, told the crowd in Frankfort that he intends to push for federal legislation as well.

“We’re going to put an end to this,” Yarmuth said to the cheers of anti-coal advocates. “We are going to stop this abomination on God’s earth.”

Bill Caylor, president of the Kentucky Coal Association, said the legislation would cripple the mining industry, forcing companies to lay off workers while driving up the cost of coal and electric bills around the nation.

Caylor and other industry leaders contend that mountaintop removal has a positive side that lawmakers shouldn’t ignore, including the creation of flat land that Appalachian communities can use for economic development.

“Their true intent is to totally eliminate surface mining in Kentucky, which could have a devastating impact on jobs,” Caylor said.

Judd said she is unconvinced by the mining industry’s argument.

“The coal companies are thriving,” she said. “Even in this bleak economy, they are thriving. What is dying is our mountains, and they are dying so fast, so shockingly fast.”

The legislation is House Bill 104 and Senate Bill 100.