Ashton Hagans is a ‘bully’ on defense 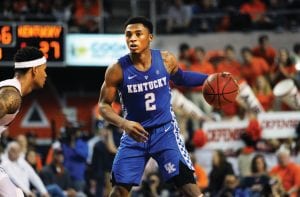 Much like Shai Gilgeous-Alexander did last season, Ashton Hagans has gone from the John Calipari recruit who didn’t create a huge national buzz to the best player at Kentucky.

National college basketball analysts don’t seem to have any worries about Hagans.

“He not only disrupts on the ball, but he disrupts off the ball,” ESPN’s Seth Greenberg, a former college head coach, said. “He’s long, athletic and has great anticipation. He has also really improved in his ability to finish in transition. He just makes it easier for everybody else. He is the guy who energizes the whole Kentucky team and I don’t see that stopping.”

ESPN analyst Jimmy Dykes, a former UK assistant coach, has an unusual word to use for a point guard. 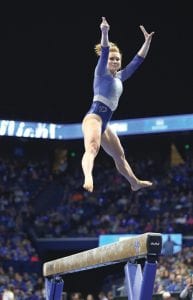 “He is a bully,” Dykes said. “If you have the ball, he is taking it. He’s like a school yard bully. He will take your lunch money, too. He changes what you want to do offensively and there are very few guys in college basketball who can do that.

“He’s really improved offensively, too. He has speed in traffic and that is not easy to do with the ball. He makes hard shots look easy.”

Some have compared Hagans’s defensive ability to John Wall, De- Andre Liggins or even Tyler Ulis. Calipari thinks he’s a bit more like former UK standout DeAaron Fox because of Hagans’s length and speed but says Hagans is stronger — or a “bully” as Dykes noted.

However, Calipari has also talked to Hagans about being like Brandon Knight, the point guard on the 2011 UK Final Four team.

Sporting News columnist Mike DeCourcy said the first time he saw Hagans play he was impressed with the way the UK freshman understood how to use defensive angles to get steals and force turnovers.

“I’ve said for a while now that Hagans is the most gifted defender I’ve covered in more than three decades in terms of ball awareness,” DeCourcy said. “He understands how to get to the basketball at a level that’s just beyond anyone I’ve seen. That’s not to say he does not have room to grow in terms of manning up on a ballhandler and coping with screens and reading an offensive player’s intent. All that comes with experience.”

Hagans credits “active hands” along with teammates communicating with him for his steals.

“They are letting me go for steals and gamble when I can. I just keep my eyes open to see where the pass is coming from,” Hagans said. “In high school you can foul all you want and the coach is going to leave you in the game. But in college that two-foul rule (two fouls in the first half leads to a spot on the bench) is real. You get two fouls you are not getting back in the game the first half.

“You don’t want to foul. I have learned from that and when to be aggressive and how the officials are going to call fouls or not.”

His coach has also learned to give Hagans a bit more freedom than he does most players to gamble on defense even though the Cats do not have a dominant shot blocker to erase a mistake if Hagans does get beat.

“Teams are all different and you let them play to their strengths. His strength is his ability to disrupt an offense, so let him go do it, and that’s basically what we are letting him do,” Calipari said.

Four years ago it was former Kentucky quarterback Freddie Maggard telling everyone that a two-star recruit out of New Jersey had the potential to be the best player in Kentucky’s recruiting class. That player turned out to be linebacker Josh Allen, a consensus All-American and national defensive player of the year this season.

Now Kentucky recruiting coordinator Vince Marrow has a bold prediction on who he thinks could be the “find” in this year’s recruiting class. He’s going with defensive end Shawn’Kel Knight- Goff of Louisville.

“He is a very athletic kid. He can play safety, he can play linebacker, he can play receiver, and he can play running back. He’s so athletic,” Marrow said. “I think this kid would have been a high four star (recruit) but his circumstances, he worked in the summer and never went to really any camps, but he came to our camp and ran real well for a guy that big. I think he’s going to be a guy that surprises a lot of people. I really do.”

He is a three-star prospect who had 66 tackles, nine sacks, three forced fumbles and one fumble recovery as a senior while also leading Doss with 16 catches for 180 yards.

Remember when Rick Barnes took the job at Tennessee in part because of the encouragement from John Calipari? At the time, Calipari praised the coaching ability of Barnes even if those at Texas totally disagreed.

Now Barnes has shared the 2017-18 SEC championship and has the league’s best team so far this season that is again leading the league.

“Number 1, I’ve said all along what a great coach he is. He and I have been friends for 30 years, maybe even longer. Please don’t say longer because that means that I’m really old, but what he does … they’ve always played the right way,” Calipari said. “But here’s what you’ve got when you have a veteran team like that, a team that he’s coached over a period of time: There are points in the game that they’re empowered, that he’s letting them understand and work through things. They don’t beat themselves. So if you’re going to beat Tennessee, you must beat them. They’re not going to beat themselves. They’re not going to give you a game. And that’s what he’s built there.”

Calipari told Barnes before he took the job that Tennessee could be a “great job,” something I’m not sure many others believed. But Barnes has turned it into a job so good that the Vols are being prominently mentioned as a Final Four team this year.

However, even Calipari underestimated one aspect of Barnes being at Tennessee.

“I didn’t think he’d be beating us this regularly. I probably would have told him not to take the job,” Calipari said.

“It was amazing. It was electric. That environment was unreal. What a great showing support from the BBN. We are blessed. We are truly blessed to be here. Let me tell you what: There is an appetite for gymnastics in this town and it’s obvious after tonight,” Kentucky coach Tim Garrison said after UK beat Arkansas in the first home gymnastics meet of the season.

“The girls were excited all week about seeing some of their buddies that can make it to the meet, some of their fellow athletes in the department, some of their professors. The families come down. They all get together and travel down, so being in front of your hometown fans, it’s unique. You don’t get that feeling on the road.”

It was senior Mollie Korth’s fourth Excite Night but was just as special as the other three.

“The fans, BBN, are so amazing. They come out and they support us every year. Nothing’s new, I mean four years and they’re just great fans,” Korth said. “It’s so much fun getting out on the floor and showing them what we’ve been practicing in the offseason all year long. It’s the best feeling in the world, honestly.”

Sidney Dukes, another senior, said the crowd makes Excite Night what it is.

Kentucky coaches keep insisting that they are not forgetting about freshman EJ Montgomery or disappointed with his performance despite his lack of playing time.

Calipari says he continues to tell Montgomery to be prepared for his opportunity and expects him to earn SEC Freshman of the Week honors like teammates Keldon Johnson and Ashton Hagans already have.

Barbee recalled a play recently where Montgomery was providing help side defense, a pass was thrown by him and yet he still recovered to block the shot — something Barbee said only a few current UK players could do.

“Very few guys we’ve had have had that instinct and ability to react and then physically go do that,” Barbee said. “So the more minutes he gets at this level, the more comfortable he’s going to be. The more he understands how hard he’s got to play to be able to sustain that kind of effort, he’ll make us better. He definitely will.”

Calipari said he already is.

“Sometimes EJ doesn’t get to play more just because we have to win the game. Other games it’s because the guy in front of him is playing so well,” Calipari said. “But he’ll get his chance. I tell him that every day.”

“PJ and Reid were great. They did what they were supposed to do,” freshman Keldon Johnson said after the Auburn win. “They just led us down the stretch and kept us together even when things got a little shaky.”