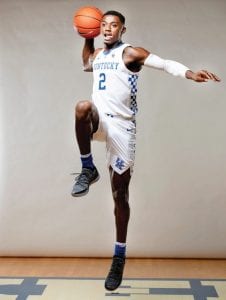 “When I made my decision after they came on my home visit, something clicked — something that I was hearing with everybody else I wasn’t hearing with coach Cal,” he said. “The other coaches were basically telling me basically what I wanted to hear. With Cal, he told me I was going to have to work and compete when I get here, because everybody is wanting the same thing, really, and get the same job.

“Other coaches were telling me I would have the ball in my hands all the time and everybody would be playing around me. The type of player I am, I want to go out there and get it and I want to put in the work if I have to. That’s what I’m doing right now and this is what I expected, that’s what he told me when he came on my visit. I’m here and I’m just trying to get better. I didn’t want it handed to me.”

Hagans admits he’s still getting used to the daily routine. Although a late arrival after reclassifying, Hagans, the Gatorade Player of the Year and Georgia’s Mr. Basketball last season, doesn’t regret his decision to enter college one year early.

Hagans said the biggest adjustment has been getting used to a different schedule on and off the court.

“The (biggest difference) has been trying to wake up early and be ahead of time,” he said. “All of the players that were here last year. They help us out. If we’re not having a good day, they’re picking us up. Nick talking to us, Quade, PJ and letting us know the next day will be better. You try to go to the gym and get your mind off the team and make sure you go to your tutors, all the classes and do what you’ve go to do to get out ahead,

“I used to get up every morning, but when we started working out, I was like, ‘hey’ I need to get some type of rest and some sleep. It’s like learning lessons and just trying to get better.”

Hagans said the preseason workouts and the overseas trip to the Bahamas proved to be beneficial.

In his spare time, Hagans enjoys reading and currently is learning how to become a better leader.

“I got this leadership book from my roommate and it’s about basketball and being more vocal on the court,” he said. “I’m a point guard so naturally everybody looks to the point guard because he has the ball in his hands the majority of the game.”