Asking Alexandria worth the wait 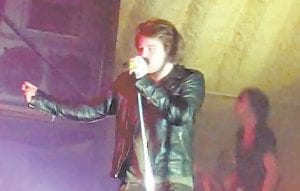 When Asking Alexandria’s highly- anticipated Louisville concert was postponed from December 1 to April 7, fans of the band began counting down the days. Although they had to wait an additional four months until what ended up being the final stop of Asking Alexandria’s “Still Reckless” spring tour, the wait would prove to be worthwhile.

When the wait was over, fans packed Louisville’s Expo Five full. As they waited, many speculated about the mysterious circumstances that caused the postponement (these circumstances were never brought to light by the band despite several rumors) while others talked about the substantial number of opening bands that would soon take the stage. Though many fans were upset when the original opening band, The Black Veil Brides, announced that they would not make it to the rescheduled show, Asking Alexandria made up for it by bringing along three diverse bands — I See Stars, Motionless in White, and Trivium.

After the lights dimmed and the conversations stopped, the bands began to play. Taking the stage first was the post-hardcore band I See Stars. The crowd immediately reacted to the Michigan band and soon began to create mosh pits throughout the 30-minute set. The second band onstage was metalcore band Motionless in White. Many crowd members sang along with the group’s songs and some even came to the show covered in black paint to mimic the appearance of the band.

Next up was Trivium. Though the band typically headlines tours, they agreed to join The Still Reckless Tour as the final opening band and got to play twice as long as the two previous bands. The fans sang and moshed so much that the group played a Metallica cover for them, a song they had not played during any of the previous stops. During this song, Motionless in White singer Chris Motionless and other band members joined Trivium to sing the song’s final chorus and leave the audience in a frenzy.

When the openers were finished, the crowd began to tightly pack together in attempts to get closer to the stage. As the eerie beginning to Asking Alexandria’s song “Welcome” traveled from amps stacked high, the North Yorkshire natives confidently took the stage and began to play a 1½-hour set that included older songs such as “Not The American Average” and “I Was Once, Possibly, Maybe, Perhaps a Cowboy King” as well as songs from their most recent album including “A Lesson Never Learned” and “ To The Stage.” While playing the entire 13-song set the band never grew tired and neither did the crowd that was throwing the band’s high energy right back.

When the band took a small break to address the audience, band members thanked them by saying, “This is the last stop of this tour and you’re making the final impression and it has been quite a memorable one … thank you!”

With those words said, Asking Alexandria broke out into their song “ The Final Episode” and the crowd broke out into the final mosh pit of the night, all the while thinking this show was definitely worth the wait.

“Dying in Your Arms” — Trivium

“Not the American Average” — Asking Alexandria

“I was Once, Possibly, Maybe, Perhaps a Cowboy King” — Asking Alexandria

“To The Stage”— Asking Alexandria