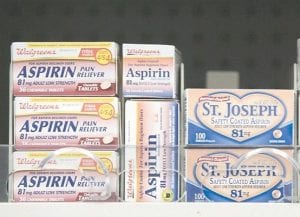 A study suggests colon cancer patients who took aspirin reduced their risk of death from the disease by nearly 30 percent.

Score another win for the humble aspirin. A study suggests colon cancer patients who took the dirt-cheap wonder drug reduced their risk of death from the disease by nearly 30 percent.

Aspirin already is recommended for preventing heart attacks and strokes, along with its traditional use for relief of minor aches and pains. Its merit in colon cancer prevention has been tempered by its side effects, bleeding from irritation of the stomach or intestines.

The new study suggests patients who already have colon cancer may benefit from taking aspirin along with surgery and chemotherapy. In a separate analysis of a subgroup of patients, only those with the most common type of tumor, those that overproduce the Cox-2 enzyme, saw a benefit.

“The paper is absolutely incredible, and I don’t gush normally,” said Dr. Alfred Neugut of Columbia University Medical Center in New York who has done similar research but was not involved in the new study. In an accompanying editorial, Neugut wrote that the study “comes as close as it can to offering patients a way to help themselves.”

“This is certainly something patients would want to discuss with their doctors,” said Dr. Andrew Chan of Harvard Medical School in Boston, who led the study,

which appeared in the Journal of the American Medical

It’s too early for an across-the-board recommendation however, both Chan and Neugut said. The results should be confirmed in an experiment where patients would be randomly assigned to take aspirin or a dummy pill. A study based in Singapore that’s now recruiting patients may verify aspirin’s benefit.

Chan’s study was observational, meaning researchers merely observed what patients were already doing, such as taking aspirin regularly for headaches. It’s possible that factors other than aspirin accounted for the difference in cancer deaths.

Colorectal cancer is the second leading cause of cancer death in the United States after lung cancer. The National Cancer Institute estimates that nearly 50,000 Americans will die from it this year.

They looked at nearly 1,300 people with colorectal cancer who’d been followed for an average of 12 years. All the patients in the study had surgery for colon cancer and many also had chemotherapy.

Among the 549 participants who used aspirin regularly after their diagnosis, 81 died from colorectal cancer (about 15 percent). In contrast, among the 730 people who didn’t use aspirin, 141 died of the disease (about 19 percent).

Taking into account other cancer risk factors, such as family history, the researchers calculated aspirin’s overall benefit: a 29 percent reduction in risk of cancer death.

“It’s exciting that an inexpensive, commonly used medication may be of benefit among this group of patients who are worried about having their cancer recur,” Chan said.

About one-third of the tumors could be tested for Cox- 2. Aspirin helped only those patients whose tumors tested positive for the enzyme. That makes sense, Chan said, because aspirin blocks the enzyme, which is thought to play a role in cancer’s spread.

If aspirin becomes the standard of care in colon cancer, testing for Cox-2 may become routine, Neugut said. That wouldn’t add much to costs, he said, because tumor tissue already is tested and a Cox-2 test could be easily added.