Aspirin fights colon cancer in some 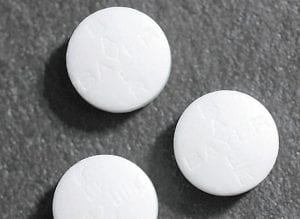 Aspirin, one of the world’s oldest and cheapest drugs, has shown remarkable promise in treating colon cancer in some patients. (AP Photo/Houston Chronicle)

Aspirin, one of the world’s oldest and cheapest drugs, has shown remarkable promise in treating colon cancer in people with mutations in a gene that’s thought to play a role in the disease.

Among patients with the mutations, those who regularly took aspirin lived longer than those who didn’t, a major study found. Five years after their cancers were diagnosed, 97 percent of the aspirin users were still alive versus 74 percent of those not taking the drug.

Aspirin seemed to make no difference in patients who did not have the mutations.

This sort of study can’t prove that aspirin caused the better survival, and doctors say more research must confirm the findings before aspirin can be recommended more widely. The study wasn’t designed to test aspirin; people were taking it on their own for various reasons.

Still, the results suggest that this simple medicine might be the cheapest genetargeting therapy ever found for cancer. About one-sixth of all colon cancer patients have the mutated gene and might be helped by aspirin. And aspirin costs just pennies a day.

“It’s exciting to think that something that’s already in the medicine cabinet may really have an important effect” beyond relieving pain and helping to prevent heart attacks, said Dr. Andrew Chan of Massachusetts General Hospital. He and others from Harvard Medical School led the study, published last week in the New England Journal of Medicine.

Cancers of the colon or rectum are a leading cause of cancer deaths worldwide. More than 140,000 new cases and 51,000 deaths from them are expected this year in the United States.

Several studies suggest that aspirin may help fight cancer, especially colorectal tumors. It is often recommended for people who have colon cancer and others at high risk of developing it. But it’s not advised for wider use, or for cancer prevention, because it can cause serious bleeding in the stomach and gut.

What has been lacking, doctors say, is a good way to tell which people might benefit the most, so aspirin’s risks would be justified. Chan’s study suggests a way to do that.

It involved 964 people diagnosed with various stages of colon cancer who were among nearly 175,000 participants in two health studies based at Harvard that began in the 1980s. Every two years, they filled out surveys on their health habits, including aspirin use.

Most had surgery for their cancer, and many also had chemotherapy. They gave tumor tissue samples that could be tested for gene activity. Researchers focused on one gene, PIK3CA, that is involved in a key pathway that fuels cancer’s growth and spread. Aspirin seems to blunt that pathway, so the scientists looked at its use in relation to the gene.

In those whose tumors had a mutation in that gene, regular aspirin use cut the risk of dying of colon cancer by 82 percent and of dying of any cause by 46 percent during the study period of about 13 years.

Only two of the 62 regular aspirin users whose tumors had the mutated gene died within five years of their cancer diagnosis versus 23 of 90 non-aspirin users with such a mutation.

The results are “quite exciting,” said Dr. Boris Pasche, a cancer specialist at the University of Alabama at Birmingham who wrote an editorial that appears with the study in the medical journal. Half a dozen drugs are used to treat colon cancer, but only one meaningfully extends survival in people whose cancers have not widely spread, he said.

“Now we may have aspirin. That’s why it’s a big deal,” Pasche said.

The test for the gene is not expensive and is simple enough that most cancer centers should be able to do it, Chan and Pasche said.

Researchers warn that aspirin may not be responsible for the improved survival seen in this study. Differences in how the patients’ cancer was treated could have played a role.

For that reason, they say the next step should be a study where some people with the mutated gene are given aspirin and others are not, so their cancer outcomes can be compared more directly.

One colon cancer patient, L. Stewart Keefe, 60, a retired interior decorator and painter from Alton, N.H., decided several years ago to try it.

“I figured, what have I got to lose by taking some aspirin? It just seems like it was a simple enough thing to take,” she said.