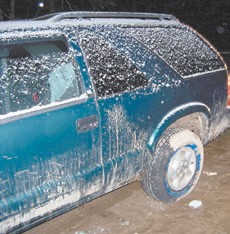 This Chevy Blazer was used to vandalize the Thornton community park, police say.

Preliminary hearings are set for later this month for two Letcher County men accused of vandalizing a community park at Thornton.

Sean Ihla of Ermine suffered serious injuries after he was beaten in the face and head with a metal socket wrench. Ihla told police Sizemore beat him with the wrench and that Adams grabbed Ihla from behind and choked him, injuring Ihla’s neck. Ihla told police about the park vandalism while making a taped statement to Letcher County Deputy Sheriff Michael Burton.

Blair said Adams and Sizemore entered the park on Feb. 16 or Feb. 17 by driving a green Chevy Blazer through a locked gate, damaging and destroying the gate. Blair said the two drove the vehicle on park ground and the walking track as well as knocking over a port-apotty, causing damage of more than $500.

Blair said the license plate holder left at the park matched perfectly to the Blazer police recovered from the home of Travis Toler of Sergent, where Sizemore left it after the vandalism.

Collins told authorities that Sizemore was driving the vehicle when the damage was done to the park, and that Sizemore hid the vehicle on Sergent because two of the vehicle’s tires were flattened when it ran over the chain-link fence. Collins said Sizemore drove the vehicle through the fence after he became angry with Collins’s estranged wife, who has since returned to her home in Indiana.

Adams and Sizemore remain in the Letcher County Jail where bond is set at $5,000 each for the assault case and $5,000 for the vandalism case.

The Letcher County Sheriff ’s Department and the Kentucky State Police assisted in the vandalism case. Burton has charge of the assault case.