Asthma not only a problem for kids 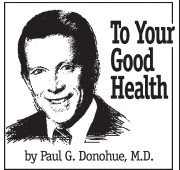 DEAR DR. DONOHUE: What gives? When I was a kid, I had asthma. Then it went away completely. Now, at age 37, it’s come back. As a child, I took only one medicine, and did well. Now I have a number of medicines and inhalers, and I’m confused. Will you simplify asthma for me? It isn’t the same as it used to be. Do you think I have developed allergies that brought it back? — H.F.

ANSWER: In the more developed countries of the world, around 15 percent of children and 12 percent of adults suffer from asthma. Asthma resolves for many children as they reach adolescence, but it can come back. Adults also can develop asthma for the first time. It’s not strictly a childhood problem.

Cough, wheezing and shortness of breath are the signs of an asthma attack. Asthma comes in attacks separated by periods when the asthmatic is well. The goal of treatment is to extend the well periods and shorten any attacks, something that wasn’t all that possible when you had only one medicine as a child.

The basis of an attack is constriction of the breathing tubes, the airways, the bronchi. Along with narrowed airways, inflammation strikes them, and they fill with thick mucus. The combination makes it diffi cult to get air into and out of the lungs. Exhaling is particularly difficult.

Triggers for asthma attacks include cold air, exercise, viral infections like the common cold and allergens. If your doctor believes that allergens are leading to your asthma attacks, then testing for them is worthwhile. For many, allergy doesn’t lead to bouts of asthma.

Exercise as a trigger needs some clarification. Everyone gets short of breath when exercising, but recovery is quick, within five minutes. Breathlessness brought on by an exercise-induced asthma attack lasts much longer, 30 to 60 minutes.

An attack of asthma often can be stopped in its tracks with an inhaler medicine like albuterol (Ventolin and Proventil). For longer control, cortisone inhalers or inhalers containing cortisone and a long-acting drug that expands airways keeps a person attack-free. Advair is an example.

The booklet on asthma has a more detailed explanation of the common illness and its treatments. To obtain a copy, write: Dr. Donohue — No. 602W, Box 536475, Orlando, FL 32853- 6475. Enclose a check or money order (no cash) for $4.75 with the recipient’s printed name and address. Please allow four weeks for delivery.

DEAR DR. DONOHUE: What can you tell me about glossopharyngeal? My doctor says I have it. He has me on medicine for it. — K.L.

Glossopharyngeal neuralgia consists of episodes of knife-like pain in the throat and back of the tongue. Swallowing, chewing and even talking can provoke an attack. Carbamazepine, gabapentin, phenytoin and valproic acid are some of the drugs used to curtail such attacks. Surgically freeing the nerve from an encircling and pulsating artery is another treatment for this condition. ©2011 North America Synd.