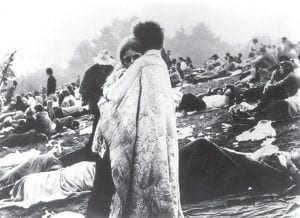 In this August 1969 file photo, which has been widely circulated, a couple shared a hug during the Woodstock Music and Art Festival in Bethel, N.Y. (AP Photo)

Forty years after Richie Havens sang and strummed for a sea of people at Woodstock, he still gets asked about it and he still gets requests to sing “Freedom.”

“Everything in my life, and so many others’, is attached to that train,” Havens said.

The young hippies who watched the sun come up with The Who in 1969 are now eligible for early bird specials. Many of the bands are broken up or missing members who died. But Woodstock remains one of those events — like the moon landing earlier that summer — that continues to define the 1960s in the popular imagination. 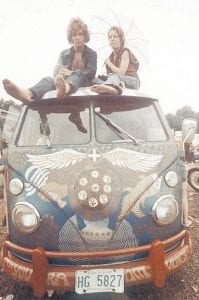 In this Aug. 1969 file photo, concert-goers sat on the roof of a Volkswagen bus at the Woodstock Music and Arts Fair at Bethel, N.Y. (AP Photo)

The Woodstock legend stems from big names such as Jimi Hendrix and Janis Joplin playing at a show where everything went wrong but turned out right.

The town of Woodstock didn’t want the concert and promoters were bounced from another site at the 11th hour. Lang settled on a hay field in Bethel owned by a kindly dairy farmer named Max Yasgur. The concert did come off Aug. 15-18, 1969, but barely. Fences were torn down, tickets became useless. More than 400,000 people converged on this rural corner 80 miles northwest of New York City, freezing traffic for miles. Then the rains doused everything.

It should have been a disaster. But Americans tuning in to the evening news that weekend saw smiling, dancing, muddy kids. By the time the concert movie came out months later, Woodstock was a symbol of the happy, hippie side of the ’60s spirit.

Baby boomers are the “Woodstock Generation” — not the “Monterey Generation” or the “Altamont Generation.” Bethel’s onsite museum has logged more than 70,000 visitors since last summer, a fair number of them college students born well after Woodstock. A roadside monument there regularly logs visitors from around the planet.

“It’s almost a pilgrimage,” said Wade Lawrence, director of the Museum at Bethel Woods. “It’s like going to a high school reunion, or it’s like visiting a grave site of a loved one.”

From Lollapalooza to All Points West, there have been plenty of big festivals focused on youth culture. The continent-hopping Live Aid shows of 1985 did that and more, enlisting top names such as U2 and Madonna to fight hunger in Africa. None have the cultural cachet of Woodstock. Who would ever ask a Generation X-er: “Were you really at Live Aid?”

People who went to Woodstock say the crowd set it apart as much as the music. The trippy anarchy of Woodstock has become legend: lots of nudity, casual sex, dirty (and muddy) dancing, open drug use. The stage announcer famously warned people to steer clear of the brown acid.

Many who were there recall Woodstock as an oasis of good vibes during a time of unrest over the Vietnam War. Ilene Marder, then an 18-year-old who hitched from the Bronx, saw people feeding one another and respecting one another. She knew she found her tribe.

Former Grateful Dead keyboardist Tom Constanten remembers hearing buzz that something special was up at the nearby hotel where the band was staying. The scale of the event sunk in when the band choppered in over the mass of people. While artists like Joe Cocker and Santana boosted their careers at Woodstock, the Dead were notoriously flat.

Jerry Garcia, the band’s late guitarist, told interviewers that his guitar was being hit with bouncing blue balls of electricity — the kind that comes from bad wiring, not strong psychedelics. Constanten said he wasn’t as bothered as his band mates.

“Actually, I had a wonderful time. The guitarists were not. Because of electrical problems, they were getting shocks from their strings and all,” he said. “Aversion therapy like that, no one needs.”

Constanten contends the music and spirit of Woodstock was not a revelation to the people there. But it was to the millions who saw the movie and listened to the album.

“This juggernaut of a music scene burst in their awareness,” he said. “It didn’t feel different to us. It was their response.”

Woodstock has been resurrected a couple of times since then, at least in name.

Promoters staged a 25th-anniversary concert near Woodstock in 1994 that was a musical success. But a 30th-anniversary performance at a former Air Force Base in Rome, N.Y., ended in disaster after crowds lit bonfires and looted on the last night. The unrelenting heat and $4 bottles of water taxed any vestiges of Woodstock spirit.

Yasgur’s old farm, meanwhile, has gone establishment in recent years. Local cable TV billionaire Alan Gerry quietly snapped up the land in the 1990s and started a not-for-profit foundation to run a museum and concert space. The gently sloping hill that provided a natural amphitheater in 1969 is nicely tended and fenced in.

Concerts are regularly scheduled over the hill from the original stage at a modern, 4,800-seat amphitheater.

Constanten and Havens are among the 1969 performers returning to the site on the 40th anniversary weekend. Havens will play a solo show that Friday, a day before a larger show featuring other Woodstock veterans such as Levon Helm, formerly of The Band, Ten Years After and Canned Heat. Though long separated from the Dead, Constanten said he’ll play the band’s songs that weekend.

No electric shocks are expected under the multimillion-dollar pavilion, and probably no generation defining magic either.

“Then is then,” Constanten said, “and now is now.”