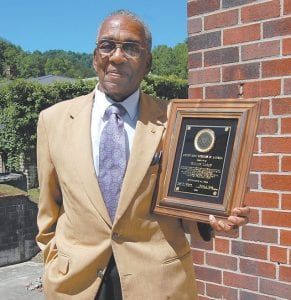 The Rev. Willie Lamb of McRoberts displays a plaque he received recently for being a member of the United Mine Workers of America for 74 years.

Ninety-two-year-old the Rev. Willie Lamb has been visiting and praying for patients admitted to the Whitesburg hospital for 60 years.

“I just felt the need because the Lord put it on my mind to go to the hospitals and visit the sick and give them something to read,” said Lamb.

In addition to being a volunteer chaplain at Whitesburg Appalachian Regional Hospital (ARH), Lamb frequently visits patients at seven other hospitals and nursing homes in Kentucky and Virginia.

“I will continue to go and be a chaplain as long as God blesses me to be able to do so because I love the people all over the world, especially those who are sick and down and need prayer,” he said. “May God bless all people in Kentucky and all over the world and in the hospitals, nursing homes and wherever they need a blessing.”

Lamb preaches every Sunday and leads a Bible study on Tuesdays at the Church of God Militant Pillar and Ground of Truth (MPGT) in McRoberts.

Lamb is the third oldest of 15 children — nine girls and six boys. His parents, the late Alex and Maggie Lamb, moved from Alabama to Letcher County in 1905.

After serving in the Army for three years and six months, Lamb married Joanna Skipper from Glade Springs, Va.

“She became my wife and we had seven kids — six boys and one girl,” said Lamb. “When I was 29 years old I got saved. I quit drinking and smoking and fighting and all that stuff. God saved me and I raised my family. Then God called me to the ministry.”

Lamb worked 36 years in the coal mines. He had different jobs in the mines throughout his career but his last job was as an underground electrician.

“I worked with some of the most wonderful people in the world in these coal mines,” said Lamb, who is a 74-year member of the United Mine Workers of America. “I am the oldest colored union man in Letcher County.”

When asked why Lamb has lived most of his life in McRoberts, he told a story about a woman named Glenna Greer who became ill in Ohio.