At least 70% of forest fires result of arson, state says 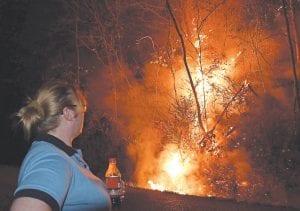 A resident of Premier Subdivision at Jenkins watched flames from a wildfire. (Photo by Chris Anderson)

Wildfires continued to rage across southeastern Kentucky this week, with more 15,000 acres in flames on Tuesday morning.

In Letcher County, fires continued to burn at Jenkins, Flat Gap and Cowan, after a number of smaller fires were extinguished over the weekend. There have been so many fires since late October that the Kentucky Division of Forestry was unable to give an accurate figure of the number of acres burned late Tuesday afternoon.

Of 15,981 acres still burning in Kentucky on Tuesday, about 15,881 were in a 16-county area in southeastern Kentucky, and more than half of that was concentrated in Letcher and Harlan counties.

A fire at Limbo Hollow at Flat Gap, across a ridge from Bad Branch Falls State Nature Preserve on the southern slope of Pine Mountain, had grown from just 50 acres last Thursday to 450 acres by Election Day.

A 1,500-acre blaze along Little Shepherd Trail on November 3 had joined with a fire burning from the Nolansburg area of Harlan County on Election Day and was burning a total of 7,400 acres, nearly half the total acreage on fire in the state that day. 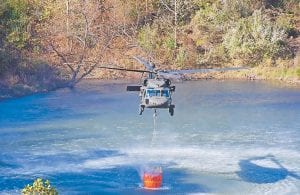 A Kentucky National Guard UH-60 Blackhawk helicopter dipped water out of a sediment pond along U.S. 23 at what used to be the head of Cane Branch of Jenkins on Sunday during airdrop operations to fight the forest fires around the city. (Photo by Chris Anderson)

Another fire that began on Number 1 Hill in Burdine had burned all the way around one side of Jenkins by Tuesday, scorching 1,000 acres on the northern slope of Pine Mountain. That’s two and a half times as large as five days earlier.

The Division of Forestry was using eight Kentucky National Guard helicopters to help battle the fires. Two were busy last week spotting fires while the other six drew water from area lakes in an attempt to put out the blazes. Low visibility on Tuesday forced a change in tactics, said Jennifer Turner, a public information officer for the Division of Forestry.

“We do still have helicopters, but they’re having a problem with the smoke,” she said. 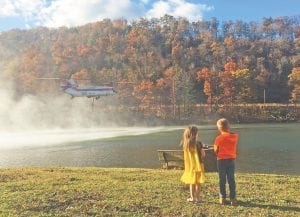 Allison and Christopher Anderson watched as a Columbia Helicopter’s CH-47D Chinook prepares to pump water from Jenkins Lake last week. The helicopter was one of three pulling water from area sources to dump onto wildfires burning on Pine Mountain overlooking Jenkins. The aerial operations drew a large crowd of spectators in Jenkins and other areas. (Photo by Debbie Anderson)

“We’ve pretty much gone down to skeleton crews in the rest of the state,” said Mark Wiedewitsch, a public affairs officer with the Division of Forestry.

Wiedewitsch and Turner said most of the fires are the result of arson. Wiedewitsch said about 70 percent of the fires are thought to have been started intentionally. The rest have come from campfires, use of heavy equipment, and burning of debris. All 16 counties now have outdoor burning bans in place in an attempt to slow the spread of fires.

Rain forecast for late Tuesday night was expected to help some, but that was the only rain in the forecast for the remainder of the week.

“I urge all Letcher County citizens to comply with this executive order so that we can provide for the safety and wellbeing of our fellow citizens and preserve Letcher County timber resources,” Ward said. 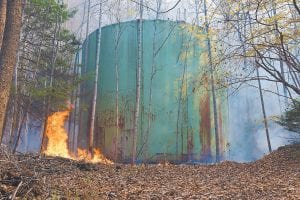 A brush fire on Pine Mountain at Jenkins surrounded a water tank at the head of No. 3 Hollow Monday afternoon. The fire has burned about 2,000 acres. (Photo by Chris Anderson)

The Courier-Journal of Louisville reported Tuesday that 52 of Kentucky’s 120 counties have declared burning bans.

The Courier also reported that some eastern Kentucky residents, including author Silas House of Laurel County, are urging the media to pay more attention to the wildfires.

“ Fi refighters are working around the clock and are stretched thin,” House said on Facebook. “Black Hawk helicopters are throbbing above Pine Mountain, dangling 600 gallon buckets to dump water onto the parched ridges. Schools have been canceled in some counties.”

Kentucky Emergency Management said Tuesday there have been no injuries and no occupied buildings damaged. However, an abandoned house in Jenkins burned earlier this week.

A state of emergency was declared in the City of Fleming- Neon after its water source dried up and burned the motors of pumps that helped supply the water. 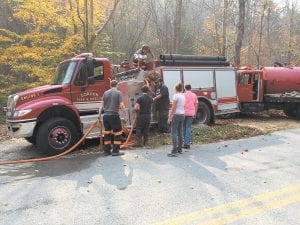 Members of the Gordon Fire Department put their equipment back on the truck after extinguishing a roadside fire last week. (Eagle photo)

Kentucky Emergency Management officials Buddy Rogers said firefighters need a change in the weather. Rogers told The Courier-Journal that light rain forecast probably not be sufficient to extinguish the fires.

Harlan County Judge/Executive Dan Mosley said some residents there have inquired about deer hunting season, which opens this weekend for rifle hunting.

“I’ve been asked if there would be a ban,” Mosley told the Harlan Daily Enterprise. “That is not our call, that’s up to the state. I do not anticipate there will be a hunting ban.”

Volunteer firefighters from across Kentucky take a much-needed break while battling brush fires at the Little Shepherd Amphitheater at Jenkins. (Photo by Chris Anderson) 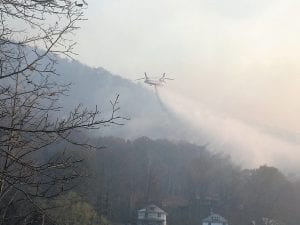 A Chinook helicopter dumped water over a forest fire in the Lakeside area of Jenkins on Monday. (Photo by Todd Bentley)