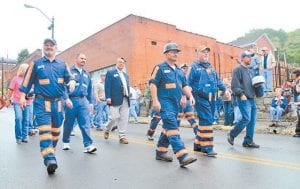 Kentucky Supreme Court Justice Will T. Scott joined coal miners who were invited to be a part of the 2012 Mountain Heritage Festival Parade in Whitesburg. (Photo by Chris Anderson) 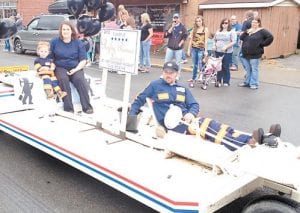 The family of Rylie Renee Lucas, runner-up in the 13-18 months category of the Mountain Heritage Baby Pageant, highlighted the parade’s coal-related theme by securing a mine buggy for her ride through Saturday’s parade.

WINNERS — Britney Bolling and her dog Princess won first place in the Best Dressed category in the Mountain Heritage Dog Show. They also won second place in the Lookalike category. Both were dressed in the theme of coal mining. Britney is the daughter of Natasha and Mathew Bolling of Deane. 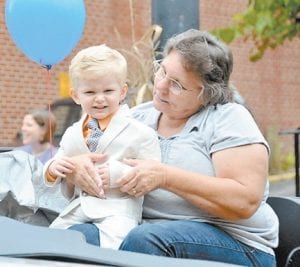 Baby pageant winner Connor Craft squinted as the sun began to shine on the parade. (Photo by Chris Anderson)