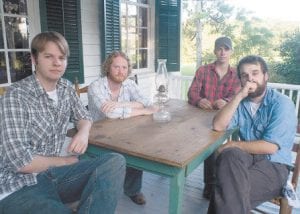 The Corduroy Road is based in Athens, Ga., but its two founding members are from central Kentucky. The Corduroy Road will perform at Summit City in Whitesburg on Saturday, June 6. Admission is $8 at the door.

The band The Corduroy Road will make its second appearance in Whitesburg on Saturday night, just a week before it is scheduled to play for the throngs of people attending the Bonnaroo Music Festival in Tennessee.

The Corduroy Road is from Athens, Georgia, and will perform at Summit City on June 6 at 9 p.m. Admission is $8 at the door.

The Corduroy Road has melded roots in Americana, folk rock, and old-time country with the rawest of live performances. The group was founded in 2006 by Drew Carman (vocals, banjo) and Dylan Solise (guitar, vocals), who were raised in the central Kentucky bluegrass region where they learned their craft until relocating to the musical gem of the southeast: Athens (home of R.E.M., the B-52’s and too many other great bands to list). The group is rounded out with John Cable on drums and Elijah NeeSmith on bass.

Touring almost constantly in the Southeast, The Corduroy Road, which takes its name from a type of logging road, is quickly gaining a reputation as one of the most exciting new bands on the current scene. The group is currently nominated for “Best Live Band” in Flagpole Magazine’s annual music awards. 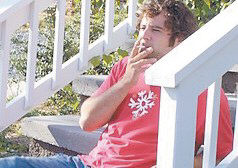 Allun Cormier, an alt-country singersongwriter from Blountville, Tenn., will perform at Summit City in Whitesburg on Thursday, June 4.

The web site Musicfile says The Corduroy Road “sit on the musical spectrum where Drive By Truckers, Reckless Kelly and The Avett Brothers collide.”

The band’s song “Just One Drop,” which is also the name to a five-song EP taken from their album coming later this summer, Love Is War, would have fit nicely on one of the early albums by the original Marshall Tucker Band.

“The Corduroy Road has quickly become one of the finest roots rock bands in the Southeast,” says a review in An Honest Tune. “Carman and Solise are emerging as one of the strongest young songwriting duos on the Americana scene.”

“The chatty banjo, rolling harmonies, the acoustic guitar and melodic, Southern vocals are the name of the game for the Athens quartet,” says a review in Creative Loafing. “The music is so damn, well comfy, that the quaint country and roots music peppered with folk rock sounds warmly familiar.”

“Fans of anything from country to bluegrass to folk to rock will especially enjoy The Corduroy Road’s notoriously lively shows,” notes Flagpole.

“The Corduroy Road’s records are influenced by old-time country and Americana, while the live performances exude the energy of punk rock,” said a review in the Athens Banner-Herald.

To sample The Corduroy Road’s music, visit their page at www.myspace.com/ thecorduroyroad.

Also performing at Summit City this week is Allun Cormier, an acclaimed alternative-country singer and songwriter from Blountville, Tenn., near Kingsport.

Cormier, 30, will perform on Thursday, June 4. He says his hobbies are writing music and drinking. He lists among his influences Wilco, John Prine, Ryan Adams/ Whiskeytown, Son Volt, and the late Townes Van Zandt (Poncho and Lefty).

Admission to the Cormier show is $5. Showtime is listed at 8 p.m.