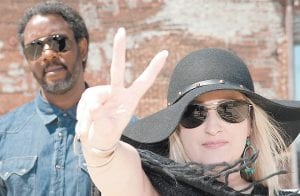 SPECIAL $5 ADMISSION — The Atlanta band 68-75 plays a style of music that will remind listeners of the classic rock sounds of the late Sixties and early- to mid-Seventies. The band will welcome in summer Saturday at Summit City in Whitesburg with a special admission price of $5. (Photo by Joeff Davis)

If you’re a fan of legendary 60s and 70s rock vocalists such as Steve Marriott of The Small Faces and Humble Pie, Terry Reid, Paul Rodgers of Free and Bad Company, or Maggie Bell of Stone the Crows, you might consider celebrating the first day of summer with Atlanta-based band 68-75 when they perform at Summit City in Whitesburg Saturday night. Admission is only $5.

As the name 68-75 would indicate, the band fronted by vocalist Suzanne Sledge and guitarist Andrew Cylar, are devotees of the late Sixties and early- to mid- Seventies sounds now labeled as “classic rock.”

“68-75 brings to the table a sound all their own, but drawing on inspiration from artists popular over 40 years ago,” writes Robyn Weiss in Screamer magazine. “Everybody talks about the token Zeppelin or Rolling Stones influences, but when a band speaks of Mott the Hoople, Free or Steppenwolf as the artists they’d most like to emulate within their own sound, it’s a new take on a vibrant feel, and sparks interest in what 68-75 are doing with their own music.”

68-75 have opened for acts such as Leon Russell, Joe Bonamassa, Blackberry Smoke, Jackie Greene, Chris Duarte, Marc Ford and Trampled Under Foot. The band released its first full-length album, Stay On The Ride, late in 2013.

“We’re definitely ‘back to the future,’” Cylar told Screamer, “and the funny thing about it is not to say that if it wasn’t recorded in 1976 we don’t listen to it; we’re always talking about new bands. In fact, we went and saw Graveyard (recently). They’re a Swedish band and they were amazing.”

“They were unbelievable,” added Sledge, “and they were definitely drawing on a Deep Purple, Steppenwolf vibe so the mindset that we have is really not that unique. It’s just that it’s scattered about, but there are definitely people with our mindset; they’re just doing different flavors of it. We’re honest about what we do; we’re not trying to imitate anybody. We’re just drawing from people that we love and kind of have an expression of that, but not a blatant imitation.”

Tony Conley writes the blog “Rock Guitar Daily,” whose motto is “I don’t listen to bad music, so why would I write about it?” You can count Conley among the fans of 68-75.