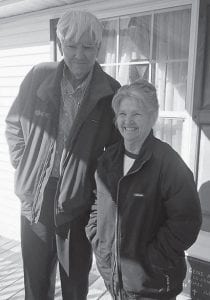 “You may see me anywhere but you can’t let me go anywhere that I won’t find someone to talk to, except this time I didn’t know this was Letcher County Court Clerk Winston Meade” says Southern Ohio correspondent Rose Ballard. “I don’t usually laugh in a picture; this was taken by surprise to me. Good thing I was behaving myself, or was I?

Happy Thanksgiving everyone! I really anticipated writing a column this week, as I am tee totally exhausted. I will say if anyone thinks I live a boring life just because I have aches and pains, come along for a ride with me.

Every roadblock was thrown at me from the minute I decided for sure that I was going. I do mean literally, as I sat down to my computer someone put a post about R# 7 being closed.

The only way was to get to Whitesburg was across Pratts Branch, which I know, or to use the winding road from Blackey to Roxana. I don’t like that road, and I will drive for miles to avoid it.

Bad weather was predicted for Thursday, along with the road closing on Thursday. I changed my reservation to Wednesday, so I solved that problem. 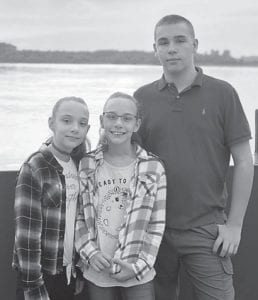 Wednesday morning I planned to leave early. Everything was packed and ready to put in the car, but that was delayed as it was so foggy in this part of the Ohio Valley area you couldn’t see to walk in the yard.

With the road going to be closed, I had to plan food for a few days, as I wasn’t going to go any farther than necessary. I finally left home at about 12 p.m., and arrived at 4 p.m. to my destination. When I finally unpacked the car, I wasn’t out of my room until Friday.

Thursday started off to be a beautiful day, but the temperature dropped, and then came the wind, cold, rain, etc. I was snug as a bug in a warm room with my radio.

As usual I awoke very early. The glow of the electric wall heater was beautiful and I had taken a coffeepot with me, so I heated water for a cup of tea, pulled the small rocking-chair close to the heater, and let my memories and my imagination go back in time of being a child with a fireplace. 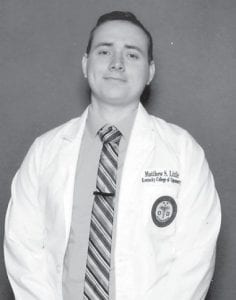 DEAN’S LIST — Matthew Little was named to the Dean’s List for the summer semester at the Kentucky College of Optometry. He is a 2013 graduate of Jenkins High School, and a 2017 graduate of the University of the Cumberlands. He is a son of Stuart and Janet Little of McRoberts, and a grandson of Lester and Genevieve Little of McRoberts, and the late Arnold and Dana Blair of Jeremiah.

Friday morning came, and then a whole new chain of events opened for me.

Bernice Grubb shared about the Letcher Veterans Memorial Museum, and I decided I was going to run in for a second to meet her husband Buddy Grubb, to thank him personally for his service to our country. Buddy has been very ill for several months; he is still not well.

I hadn’t planned on staying for the ceremony, so I said goodbye to Buddy and Bernice and I walked out the door. I was surprised as the program was about to start, which meant I was blocked in. This was the best thing that could have happened to me.

I had never been to a ceremony for our veterans, and this was such a touching event. My dad Clayton Hall was in the Army before I was born. I have the flag upstairs in my closet. There’s a bronze plaque at the foot of Dad’s grave.

Thank you, Buddy Grubb and all the veterans who gave their all, who have stood brave and fought for our freedom that we take so much for granted.

I had the pleasure of meeting Winston Meade, who somehow how I failed to catch being a county official, until I saw a picture with Winston and me in front of the museum. Oh well, you may see me anywhere.

Terry Adams, I can still see that smile when I told you that someone was going to get wet from the drip coming from the roof. You owe me a dance at Carcassonne Community Center Square Dance next spring, or I will disclose who it was standing.

Oh my goodness did I just threaten to blackmail a judge? Terry, it was a pleasure to see you again.

Ricky Rose, I am sure I saw you in the crowd across the street.

After I saw Bernice Grubb, I had another surprise waiting for me. As I came down a side aisle I met Mary Whitaker Halcomb and her sister Linda Whitaker Day.

I knew the Whitaker clan was going be at their home-place, and thought about crashing their gathering. Anyway I didn’t have to crash it, as Mary invited me to stop by.

Their older brother, Bud from Texas, was going to be there. Several years I met Bud at Aurora, Ind. at my little Mountain Mama Alma Whitaker’s 95th birthday celebration. Alma is the Whitakers’ mother, but they shared her with me.

Bud didn’t really recognize me until I said I was Clayton Hall’s daughter. For an hour I reveled in such happiness talking to and listening to things about Daddy.

When I first met Bud, he shared with me something as Bud had a picture I didn’t know existed, a picture of Dad, Ray Gentry and Levine Fields, when Dad was young.

I asked Bud if he was one of the guys who used to gather to shoot dice on the railroad tracks at Roxana. Bud replied yes and started laughing. Bud said he wished he had all day to talk to me to let his memories come back. I could have stayed in the same spot all day and listened to him.

As I started to feel sentimental I could feel the tears welling up, so of course I made a joke, or to me it was a joke!

There were paper plates on the table, to keep the tears back. I said that before I leave I am going to pass a plate or bowl for a donation so I can buy gas to get back to Harrison, Ohio.

Now I bet Woody Whitaker was the first to donate, to make sure I didn’t stay too long.

I turned my head for a second to speak to Mary or one of the girls, and as I turned back to the guys there was a bowl full of money in front of me.

I’m telling you I was so embarrassed at my stupidity, never ever thinking they would take me serious.

Cena Fay’s husband, Collins, started teasing me, saying you didn’t see that side putting money in. I replied laughing saying that side was smart enough to know I was kidding, and you guys weren’t.

I had the pleasure of taking a picture of the family, which was an honor for me. Cena had to show me how to use the phone for a photograph.

Wendell was a little late, but he arrived just as I had gotten finished taking the picture. After hugs and more hugs, the family gathered outside for me to take another picture.

I could write for hours and never convey how much it meant to feel the love of this family in a home they still go to.

Those in attendance, Bud, Willis, Woody, Wendell, Mary, Wilma, Cena Faye, and Linda and Cena’s husband Collins and a young girl, which was one of their daughters. I am very sorry I didn’t get her name.

Mary’s husband Bill Halcomb wasn’t able to attend, however, as there was a death. Bill was going to try to come to the mountains after all.

Alma’s house is just the same as I remember. I am telling you, that you could feel the love in this family.

My husband Clayton Durham and I used to go visit Alma, as he adored Alma and she loved him too.

There’s only one thing I regret. Woody brought in a chestnut, and I meant to ask him if I could have a couple to bring back to show my grandson Bennie Wiederhold.

Thanks, everyone, for showing me such warmth. Now, Woody, you didn’t have to watch what you said!

I barely got back to my room to have enough time to rest a little before going to Campbell’s Branch Community Center.

On the way someone got behind me with bright lights blinding me, so I missed the turnoff to the center. When I finally found a place wide enough to turn, there was a small drop-off, and I scraped the bottom of my car. I still don’t know if it scratched the paint or not.

Of course I started feeling sick so I left about halfway through the show. Bertha Turner, Doris Adams and her friend were there. It was good to see Eli without his wheelchair. Eli will be back dancing before too long. Thelma and Louise were both on the dance floor.

Darlene, Fred and Alice Campbell, along with Shawn Stamper, are never surprised to see me pop in at any time. Well, Shawn finds it sort of amazing that I drive that far by myself.

Please remember Tee Campbell in your prayers as Tee is going through some health issues. Carl Boggs, I missed seeing you.

Saturday, I had to go back to Walmart. When I was there Friday, something happened that I really upset me after I discovered it. In my rush to get to Veterans Museum, I didn’t notice the girl who was bagging gave me two bags

I pitched the bags in the seat and went on my way, only too discover I had a pack of pink clothes hangers. As I checked my receipt I wasn’t charged for them. I didn’t want to keep them as they weren’t mine, so I took the receipt back to Walmart explaining to the manager what happened.

I said the thing that bothered me is, had I been stopped I would have been accused of shoplifting, not realizing the cashier had given me someone’s purchase. She thanked me for being honest, saying she would find out who made the mistake.

Saturday evening, thanks to Jack Adams, along with his girlfriend Hannah Fowler, who picked me up to escort me to Carcassonne Community Center. It was great not having to drive off that mountain at dark.

Oh how I longed to be able to dance. Maybe next year if God is willing to let me live until then.

Mike and Marcia Caudill, it was wonderful to see you again. I’m sorry I didn’t come back to give you a hug before I left.

Hello to Les and Pat Wagner. I need an update on your anniversary trip. Hello Polly and Becky Hasty and Becca.

Doris, it was good talking to you, and thanks to you and your husband for sitting with me. Watch those screwdrivers. Please drop me a line so I can have your address; my address is at the bottom of my column.

Johnny and Ann Calihan are doing as well as expected. Sympathy goes Ann and Johnny’s daughter Sue and her husband Tom Wagner’s family in the death of Tom’s dad, Bert Wagner. Tom lost his mother a couple of months ago.

Again time has caught up with me. Until next time, Rose Ballard, 9110 Lawrenceburg Rd., Harrison, Ohio 45030, email: Bluegrassmama4@aol.com.