By WILL WRIGHT
The Lexington Herald-Leader 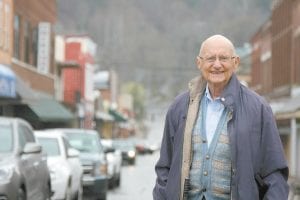 Far from his soon-to-be home in Prestonsburg, a Jewish attorney and Holocaust survivor got a phone call that would change eastern Kentucky forever.

John Rosenberg and his wife, Jean, had recently decided to leave their careers at the U.S. Department of Justice, and opted for a road trip.

They loaded a Peugeot with a tent and a baby carriage for their 3-month-old son, and drove north.

The trip lasted months. From their home in Washington D.C., they cruised through Canada’s park system along the Bay of Fundy, into Nova Scotia and Prince Edward Island.

Then, one day, Rosenberg got the call. It would set him on a path to become one of the most influential attorneys and public servants in eastern Kentucky.

He talked with Terry Lenzer, a Department of Justice attorney who worked with Rosenberg on a number of prominent civil rights cases. Lenzer told Rosenberg to visit eastern Kentucky, where a group of attorneys based in Charleston, West Virginia, were hoping to expand their legal service.

He visited Prestonsburg, where he would soon move and open his own free legal aid office called the Appalachian Research and Defense Fund (AppalReD).

As an attorney, he worked on cases and projects that helped pass a constitutional amendment outlawing the use of broad form deeds, which for decades allowed coal companies to strip mine the property of landowners without their consent.

“He is absolutely irreplaceable,” said Ned Pillersdorf, a Prestonsburg attorney who first met Rosenberg 38 years ago. “I shudder the day when he’s gone. Where would the less fortunate be without him, and where will they be when he’s gone?”

Rosenberg’s resume lists his involvement, either as a founder or a board member, of countless nonprofits and legal associations. Within the legal community, he is known as a champion of providing legal aid services for the poor, and has campaigned for their state and federal funding for years.

AppalReD has provided free legal representation and advice to thousands of people as they fought for housing, social services and freedom from domestic violence.

Tony Oppegard, a Lexington attorney who worked for AppalReD for about 18 years on coal mine safety and safety discrimination cases, recalled a case in the mid- 1980s when a family’s home was destroyed by a boulder knocked loose by a strip mine operation on the mountain above their house.

“In that case, they were a poor family. There were no local attorneys that were going to sue coal companies — AppalReD was their only recourse,” Oppegard said. “When AppalReD sued, that was really stepping on people’s toes there.”

Oppegard has many similar stories, where AppalReD was the only group willing to stand up to the powerful judges and coal companies that ruled life in the mountains.

“I never knew of John to back down from a controversial case,” Oppegard said. “To me, he really is a giant of a man and has done incredible things in his life.”

On November 9, 1938, a 7-year-old John Rosenberg and his family were pulled from their second-floor apartment in Magdeburg, Germany, by Nazi soldiers.

The Nazis led Rosenberg into the courtyard of the synagogue next door, and forced him and his family to watch as they made a bonfire of Jewish books and holy scrolls.

Then, they blew up the synagogue.

That night would come to be known as “Crystal Night,” when the Nazi government set fire to and destroyed nearly every synagogue in Germany.

Rosenberg’s father and 200 other Jewish men in Magdeburg would eventually be arrested and sent to a concentration camp.

After 16 days, his father and the rest of the 200 who survived — 20 died during those 16 days, Rosenberg said — were released and given 30 days to leave the country.

The Rosenbergs ended up in a detention camp in Holland, and, through a connection of Rosenberg’s father, boarded one of the last ships to leave Holland for the United States. (The Rosenbergs narrowly avoided being transferred to the Westerbork camp, where, after Germany’s occupation of Holland, the Nazis would load Jews onto trains and send them to Auschwitz).

Rosenberg remembers how many flags were flying in New York City that day — it was President’s Day — and how an immigration officer promptly changed Rosenberg’s first name from Hans to John, and his brother’s from Horst to Harry.

The family moved south, bouncing between towns in North Carolina and South Carolina.

Rosenberg graduated from Duke University in 1953 with a chemistry degree and, through his participation in Air Force ROTC, became a second lieutenant after graduation.

It was on a train ride with a fellow soldier from New York to the Carolinas that Rosenberg first became appalled by, and hoped to change, the system of total segregation that ruled Southern life during his upbringing.

A black soldier accompanied him on the train but, in Washington, D.C., moved to the back of the train before it entered Virginia.

“John was really struck by that,” said Steve Sanders, the former director of the Appalachian Citizens’

Law Center, who worked for Rosenberg for years at his legal aid service in Prestonsburg.

Using the G.I. Bill, Rosenberg earned a law degree from the University of North Carolina, and began an illustrious career as a trial lawyer for the Civil Rights Division of the U.S. Department of Justice.

He presented a case in Alabama, where local officials in Dallas County tried to block the votes of black citizens in the state’s first election after the passage of the Voting Rights Act.

He investigated the Freedom Summer murders, and it was also at the Civil Rights Division where he met his wife, Jean, who would go on to make her own Kentucky legacy focusing on social justice in eastern Kentucky.

“That’s a marriage made in heaven there, the two of them,” said Janet Stumbo, who was the first woman to be elected to the Kentucky Supreme Court without being appointed, and is a longtime friend of John and Jean Rosenberg. “They’ve made a huge impact on the community, and not just the legal profession.”

Along with acting as a partner on a number of projects, including the founding of the East Kentucky Science Center and Planetarium in Prestonsburg, Jean Rosenberg “inspired his work and inspired him,” Annie said.

“She’s always been a part of the fabric of Dad’s life,” Annie Rosenberg said. “Without her energy and insight and ideas, I don’t think Dad would have accomplished what he had.”

After his 1970 visit to Kentucky, Rosenberg opened his own Appal- ReD office in Prestonsburg.

During a recent interview, Rosenberg recalled the transition to life in eastern Kentucky. It wasn’t easy.

His arrival was not welcomed by many local attorneys, and downtown landlords refused to rent him space.

For starters, the local bar association held a meeting in hopes of persuading members to prevent Rosenberg and his office from practicing locally. People were unsure about this outsider, especially one who had worked for the federal government.

Acceptance came with time, and even his critics came around, according to many of Rosenberg’s former colleagues.

“He is really quite a people person,” Sanders said. “A lot of his adversaries, or people who would be opponents, really liked him and enjoyed talking with him, and wanted to continue those conversations. He’s just a very, very likeable person.” Rosenberg’s work, too, soon grew a reputation of its own.

His AppalRed office, which broke from the West Virginia organization in 1973, worked with the Kentucky Fair Tax Coalition — now Kentuckians for the Commonwealth — on a years-long campaign that eventually led to the constitutional amendment that outlawed broad form deeds.

The amendment, in 1988, passed by a margin of 4-1, largely because of the marketing campaign John Rosenberg helped create, Stumbo said.

“ That was John,” she said. “That all started in his brain.”

Sanders, of the Appalachian Citizens’ Law Center, said he wasn’t sure why Rosenberg would end up being so dedicated to the plight of Appalachia in particular, but, at the time Rosenberg came to eastern Kentucky, “there was just so much activity going on then … I think John saw a real clear place where he could do something as a lawyer on important issues.”

During an interview at the AppalReD office, Rosenberg said he’s remained busy since his retirement in 2001, particularly in finding legal representation for the clients of Eric Conn, the former Pikeville disability lawyer sentenced to 27 years in prison for defrauding the Social Security system of millions of dollars.

AppalReD has taken many of those cases, and Rosenberg, through his vast contacts in the legal world, has found lawyers willing to take hundreds of the Conn cases for free.

“That does not happen without John Rosenberg’s connections nationwide,” said Pillersdorf, whose law firm has managed many of those cases. “I hate to think where we would have been without John.”

From the time she was a baby, Annie Rosenberg said her dad was almost always working.

On long drives during their vacations, she remembers her father sitting in the front seat, dictating legal documents onto tapes that he’d bring back to his secretary.

“At the same time, it seemed like he was always attentive to me and my brother,” Annie Rosenberg said. “We were always doing something together.”

During social events — and there were many — she remembers her family always being the last to leave. Her dad just couldn’t help but strike up long conversations.

Jean Rosenberg developed a “slow, measured walk” to the car to signal that it was time to go, Annie Rosenberg said.

But it was that enthusiasm for conversation, and for the stories of other people, that made John Rosenberg the successful attorney and public servant he was, she said.

It was his gentle demeanor and passion for poor people’s issues that eventually earned him the trust and respect of local attorneys and politicians, his former colleagues said.

After award ceremonies — and, again, there were many — Annie Rosenberg remembers how her dad always passed credit to other people he worked with, or otherwise deflected responsibility for the impact of his work.

“He doesn’t see himself as a leader. He always would say, ‘It’s not me who’s doing the work, it’s the people,’” Annie Rosenberg said. “He means that, and that’s how he’s operated in eastern Kentucky to bring about change.”

Annie, a social worker and therapist who lives in Versailles, said John Rosenberg’s successes — Appal- ReD, the Appalachian Citizens’ Law Center, and the countless other non-profits and services he helped develop — were built to last.

His mission was not to create a legacy for himself as an attorney or a public servant, but to create an infrastructure that will, even after his death, give poor people in eastern Kentucky access to legal services and places to tell their stories, she said.

“I remember seeing Dad always working to empower people so they could have a voice — that they would be able to attain the skills and the resources they need to solve problems,” she said. “His work are like the roots of a tree. It will ripple out.”