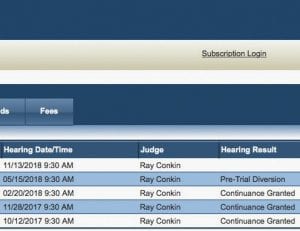 This screen grab of the Sullivan County, Tenn., General Sessions Court website still indicated early Tuesday night that a Whitesburg dentist’s May 15 hearing ended in Pre-Trial Diversion with a follow-up hearing set for November 13. An attorney for the dentist, Dr. David Narramore, said there has been no Pre-Trial Diversion agreement entered in the case and that an August 1 article appearing in The Mountain Eagle about the matter was “factually inaccurate.”

A Tennessee attorney says an article published in the August 1 edition of The Mountain Eagle concerning the status of a court case involving Whitesburg dentist David A. Narramore was “factually inaccurate.”

“Our law firm represents Mr. Narramore in connection with the pending allegations in Kingsport General Sessions Court, Sullivan County, Tennessee,” Kingsport attorney J. Matthew King writes in a letter to The Mountain Eagle. “We are writing to inform you that the news article published recently regarding David Narramore’s pending legal matter in Sullivan County, Tennessee is factually inaccurate. We request that you revise this factually inaccurate article as it contains statements, which upon your further investigation, you will see are false.”

At issue is a report that appeared at the bottom of Page 9 in last week’s issue of The Eagle. The article said that Narramore, who was arrested on two charges at the Belk’s store in Kingsport after an alleged incident in July 2017, was entered into pretrial diversion in May for a charge of indecent exposure, but is no longer charged with resisting arrest.

The article, which made no men tion of the entering of a guilty plea, said Narramore would no longer face prosecution if he meets conditions set by a Sessions Court judge, including the payment of $391.50 in court fees, has no contact with the Belk’s store in Ft. Henry Mall, undergoes anger management counseling and performs 100 hours of community service.

The information used in the article was obtained from Sullivan County’s “Online Court Records System” and a telephone call to the office of the clerk of that county’s General Sessions Court. The report said that, “pretrial diversion in Tennessee does not require an admission of guilt.”

“Mr. Narramore did not enter into pre-trial diversion. Mr. Narramore is not on probation,” wrote King, a member of the law firm Spivey, King & Spivey. “Any court record or court personnel that indicates otherwise is incorrect. Mr. Narramore has not made, nor will he make, any admission of guilt in this matter. He will not do so because he is innocent of all alleged charges.”

In his letter, King said the phrase “pre-trial diversion” should not appear on the Sullivan County Online Court Records System because it is a “civil” agreement reached outside of criminal court.

In a later telephone conversation with The Eagle, he said he would demand from the clerk’s office that the website be corrected so that words pre-trial diversion no longer appear in connection with the Narramore. He said he would have contacted the clerk’s office last Thursday (August 2) had the office not been closed because an election was being held. The phrase pre-trial diversion still appeared on the website on the evening of August 7 under “Disposition Type.”