Attorney’s scrip collection believed to be best in region 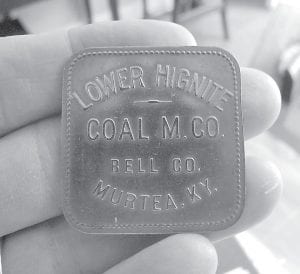 This photo shows a piece of metal scrip, the coins issued by coal companies in Appalachia in the early 1900s for use in their commissaries. The piece is part of an extensive collection that belongs to Pineville attorney Steve Cawood. (AP Photo/The Lexington Herald-Leader, Bill Estep)

There are hundreds of history lessons and stories in Steve Cawood’s collection of scrip, the coins issued by coal companies in Appalachia in the early 1900s for use in their commissaries.

There’s the 25-cent piece from a coal company that President John F. Kennedy’s grandfather owned in Bell County, and another piece Cawood received from the son of the man who was superintendent of a mine at Kettle Island that blew up, killing more than a dozen miners.

There are the two coins issued in 1920 by the Lena Rue Coal Company in Harlan County, owned by Cawood’s grandfather, a friend of Teddy Roosevelt’s who was elected sheriff under the banner of the former Republican president’s Bull Moose Party.

Cawood, a Pineville attorney and former Democratic state representative, joked that election a century ago is the closest anyone in his family ever came to voting for a Republican.

Coal companies issued scrip — coins typically made from brass, aluminum, nickel or copper — as a type of credit. Miners could draw scrip as an advance on their wages, and they and their wives could spend the coins at the company store for food and supplies between paychecks. 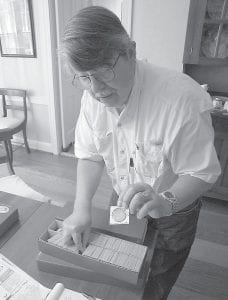 “The history of it is what I love,” Cawood said. “That’s what intrigues me.”

Cawood’s scrip collection, which he stores in a bank vault, includes thousands of coins. He focuses on scrip from Southeast Kentucky.

The first coal-company scrip issued in Eastern Kentucky that collectors have documented was from the Pine Hill Coal Co., in Rockcastle County, in the 1870s, Cawood said.

The coins generally mirrored the denominations of real money, such as dimes, quarters and dollar pieces.

The Mary Helen Coal Co. in Harlan County had the widest range of scrip, issuing coins worth a penny up to $20, Cawood said.

Thousands of coal companies in Eastern Kentucky and neighboring regions issued the tokens in the early decades of the 1900s as new rail lines opened the area to a boom in production.

Cawood, 69, had an uncle who sold mine supplies, and he sometimes went with him. Scrip was still in use in coal camps at the time, and people would sometimes give him pieces, sparking a lifelong fascination.

The most common misconception about scrip is that companies issued it as pay; in reality, Cawood said, Kentucky and other states outlawed payment in scrip after some rare abuses in the late 1800s. Scrip was actually an advance on wages, he said.

The system of company commissaries and scrip was born partly out of necessity. The mines in Eastern Kentucky, southern West Virginia and southwest Virginia were often far from towns, so workers had limited access to stores and banks.

Companies built houses at the mines to rent to workers and established company-owned commissaries to supply food and other needs. Using scrip for advances was one way to keep down the amount of cash on hand, but there also was an element of controlling miners and making a profit.

A company’s commissary could help it make money even in lean times, by recapturing a good bit of miners’ wages with a requirement that the tokens had to be redeemed there. In 1931, for instance, a New York Times story said many Harlan County mines “were turning their only profit at the commissary,” according to the 2006 book Coalfield Jews: An Appalachian History by Deborah Weiner.

A federal commission found in the mid-1920s that prices at coal-company commissaries were uniformly higher than at independent stores, Appalachian scholar Ronald D. Eller wrote in his 1982 book Miners, Millhands and Mountaineers: Industrialization of the Appalachian South, 1880-1930.

With low wages and little work at times, requirements that miners buy their own job supplies from the company, and abuse of the credit, miners could end up with little or no cash coming to them the next payday.

But there were reportedly also times when companies extended scrip even when miners had no wages coming so they could get food, said Doug Tolley of Beckley, W.Va., who also has an extensive scrip collection. In Tolley’s view, the scrip system “was not nearly as onerous as credit cards are now.”

In some places, scrip issued by a coal company was used elsewhere in the community, where other businesses often accepted at a discounted rate — 75 cents on the dollar, for instance — then redeemed it with the coal company at a higher rate, Weiner said in Coalfield Jews.

The use of coal-company scrip at other stores was not as widespread in Bell and Harlan counties as that book described in West Virginia, Cawood said; bootleggers, and doctors who didn’t work for coal companies, were the two groups in the southeast corner of Kentucky who most often redeemed coal-company scrip aside from the companies themselves.

Coal companies in more than 30 states issued scrip, but they were not the only ones issuing it. Cawood has one 1890s token good for a one-day stay at a Middlesboro hospital, as well as some scrip that was redeemable at a house of ill repute. Lumber companies, cotton mills, and merchants also issued scrip.

A handful of coal companies used scrip in Kentucky into the 1960s, but most use of the company coinage died out in the 1950s, Cawood said. Most companies moved away from owning towns and running commissaries with the rise of smaller mines that were not tied to a coal camp and didn’t supply a single affiliated company. Also, road improvements in the 1940s and 50s made miners more mobile, and shopping options increased with the growth in independent stores and mail-order retail.

At one time after the scrip system died, there was little value attached to the company coins. That changed after collectors published a directory in the 1970s that listed thousands of pieces of scrip and rated their rarity, Tolley said.

Cawood, a respected collector who has been instrumental in updating the scrip guide, has built what is likely the best collection of scrip from southeastern Kentucky in existence, said Bill Campbell, an Alabama collector who is president of the National Scrip Collectors Association.

Cawood has gotten scrip from old miners, clients and other sources through the years.

He and other scrip collectors use coal-company directories, century-old state mining records, railroad shipping manifests, a directory of 1920s and ‘30s commissaries, union records and other sources to dig out the history of their pieces.

A number of coins in Cawood’s collection are the only known examples from long-gone companies. The rarity of scrip changes, however, as people find boxes of the old tokens tucked away in attics, for instance.

“New scrip turns up all the time,” Cawood said.