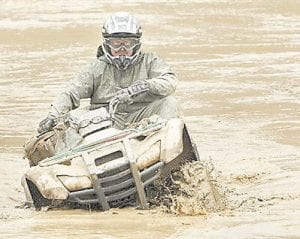 FUN BUT DANGEROUS – Todd Hershberger, of Haymarket, Va., rode his all-terrain vehicle through a water hole recently on the Hatfield-McCoy Trails near Gilbert, W.Va. Safety advocates worry summer will bring an increase to the number of ATV-related deaths and injuries. (AP Photo/Jeff Gentner)

The 18 deaths were nearly double the average for other weekends in May, according to estimates by the Consumer Product Safety Commission. The five children were 16 or younger.

– Stick to off-road venues and away from roads or highways.

For Carolyn Anderson of Brockton, Mass., the deadly Memorial Day holiday was a grim reminder of the 2004 death of her 14-year-old son, James.

Anderson wants the government to ban youngsters from using the popular off-road vehicles – something the Consumer Product Safety Commission has declined to do. 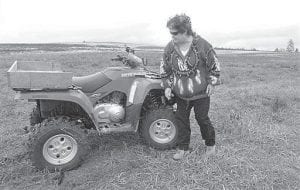 LUCKY TO SURVIVE – Marjorie Lienhard looked over her four-wheeler for damage in Princeton, Idaho, as she described how it flipped over last year and pinned her to the ground for 20 hours. (AP Photo/Lewiston Tribune)

“Kids under 16 don’t have the judgment, they don’t have the physical strength a lot of time,” said Anderson, co-founder of Concerned Families for ATV Safety. “They’re short on common sense.”

“A lot of parents want their kids to ride ATVs,” said Tim Buche, president of the California-based Specialty Vehicle Institute of America. “ATVs are loads of fun every day for millions of Americans when used safely and responsibly.”

Under a voluntary agreement between the industry and the commission, major ATV distributors require dealers not to sell adult-size ATVs to people who might allow children to ride them. Consumer groups say

Less reliable is recent data on fatalities involving ATVs. The Consumer Product Safety Commission has agreements with 100 hospitals in several states to report injuries. Coroners are required to report deaths involving the off-road-vehicles. Reports from both sources are still arriving for 2005.

So far, the commission knows of 467 ATV-related deaths in 2005. Wolfson said commission staff members believe that number is much higher, closer to 700.

Nearly 137,000 people went to the hospital in 2005 for injuries involving ATVs, according to the commission. About a third of the injured were children. The commission estimates that 90 percent of those injured under 16 years old were riding adult-size ATVs.

For more than a year, the commission has been considering regulations that would lift restrictions on the engine size of youth ATVs, allowing manufacturers to make bigger vehicles. At the same time, the commission would require installation of equipment to limit maximum speeds, based on the riders’ age.

The American Academy of Pediatrics opposes the proposed rules and wants kids banned from riding all ATVs, youth models and those made for adults.

“The academy feels strongly that children aren’t developmentally ready until about age 16 to operate a complex machine such as an ATV,” said Dr. Gary Smith, chairman of the AAP Committee on Injury, Violence and Poison Prevention. “It has to do with maturity, with judgment, with coordination, with strength.”