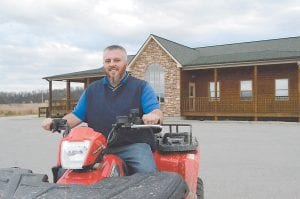 Shawn Owens, Knott County tourism director, sits on an all-terrain vehicle at the Mine Made Adventure Park in Leburn, Ky. The ATV park was built on a former coal mine and local officials hope the park can generate tourism dollars for the small Appalachian county (AP Photo/Dylan Lovan)

All-terrain vehicles and motorbikes now zoom along the hilly terrain in Knott County that was left behind when mine operators shut down operations and left, taking good-paying jobs with them.

Now the mining site, renamed the Mine Made Adventure Park, is buzzing with the sound of twostroke engines as all-terrain vehicle, dirt bike and horseback riders dot the wide-open landscape, bringing with them the potential for a tourism boost to the economy.

“We have to develop an alternate economy, and finding that alternate economy that can provide sustainable jobs,” said Shawn Owens, Knott’s tourism director. “You know, coal miners were making $20 and $25 an hour here, and those jobs are gone now.”

Inside the park there are no obvious signs to visitors that it was once a coalmine, except for an old company posting that stands at the entrance. After a ride up the hill, there are panoramic views in all directions of the surrounding hills and hollows. The park, which has been developed in recent years, has about 100 miles of trails, and there are wide dirt paths everywhere, at differing elevations.

There is no admission to the park, but riders must bring or borrow an ATV. In such a remote area, ATV rentals are hard to come by.

Owens took an Associated Press reporter on an ATV ride around the park. The two-seater quickly accelerated to 30 miles an hour as it glided — though not too gently — over the dirt trails on a cool November day.

Taking a break from the ride, Owens explained that ATVs are commonplace in eastern Kentucky, since they can be used for utility or fun.

“It’s an experience like none other because you can ride perfectly smooth roads or you can turn down in a hollow and get into more aggressive terrain,” he said.

The park holds promise for a county searching for a new eco- nomic engine as the coal industry continues its withdrawal from the region.

In 2012, there were just 330 people employed at Knott County mines, a decline of more than 63 percent from the previous year, according to a report by the state’s Department for Energy Development and Independence. Neighboring Breathitt County saw a similar decline in jobs of 68 percent last year.

After the coal operators finished mining this site, it was reclaimed in accordance with federal law, which typically means it must be repopulated with plantings and restored to its original land contours. Political leaders and coal industry supporters have touted these lands as prime real estate in a region full of jagged, hilly terrain. But business development has been spotty. An Associated Press review in 2010 found that less than 2 percent of more than 345,000 acres of reclaimed mining lands in eastern Kentucky had been designated for either commercial or residential development.

Wilson said Knott County has a challenge ahead of it in figuring out how to tie the ATV park to the local economy. It has two major annual horseback riding events in the spring and summer that attract thousands, but there is a shortage of lodgings and eateries in Knott where tourism dollars can flow in.

“It’s great when you’re serving that many people, you have thousands of people coming in,” she said. “But when all that is outside your community, it goes with them when they go, and usually it’s dollars that that community needs.”

The park was recently awarded a $100,000 grant that Owens said would mostly go toward the development of 20 miles of trails and installation of public restrooms at the site.