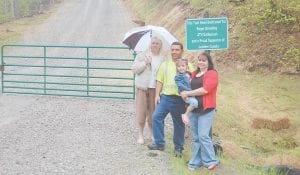 Breeding helped found the Mountain Crawlers, a local ATV club, and actively encouraged the creation of an ATV trail in Letcher County.

“It’s an honor for the Breeding family to be a part of this trail here,” said Tim Breeding, one of Roger Breeding’s brothers. “Roger was one that besides barbering, four-wheeling was his life. If you went with him you had to be tough. It was nothing for Roger to go riding 100 miles a day.”

Tim Breeding said people would ask his brother for advice where to ride because he knew where most of the trails were and where they led.

“Roger came to a lot of fiscal court meetings to get this started,” said Letcher County Judge/Executive Jim Ward at a groundbreaking ceremony recently. “Roger was a fellow that has pushed for a long time to get an ATV trail here.”

He said a road will have to be built across the mountain to where all the trails are located.

“This is something that we have worked hard for,” said Ward. “It took us a while to get it all together.”

The county obtained a $100,000 grant through the Recreational Trails Program, which is an assistance program of the Department of Transportation’s Federal Highway Administration (FHWA). The fiscal court will also apply $150,000 in coal severance funds to help finance the trailhead and an RV park.