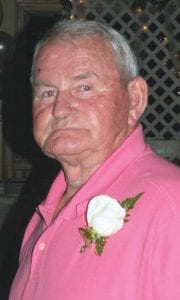 Funeral services will be held today (Wednesday) for an Isom man found Sunday evening trapped beneath an all-terrain vehicle.

Calvin “Coolie” Baker, 76, was operating the ATV on a logging road when it overturned and pinned him underneath, Kentucky State Police said.

A family member told police he went out looking for Baker after he was unable contact him on Sunday. The family member located the ATV and Baker on Daniels Branch Road near Isom, which is a short distance from Baker’s home.

Funeral services for Baker will begin at 1 p.m. today (Wednesday) in Whitesburg. Burial will follow at Green Acres Cemetery in Ermine.

A son of the late Roosevelt and Kylone Sturgill Baker, he was married to Janice Isaacs Baker on June 22, 1961.

He enjoyed hunting and fishing. Baker was an avid University of Kentucky basketball fan.

Baker was preceded in death by a sister, Dorothy Baker.