Auburn transfer says UK is ‘on a roll’ 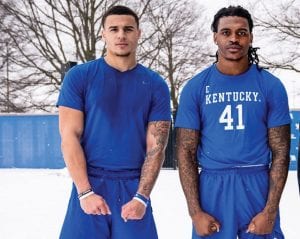 Auburn transfer Joey Gatewood, left, hopes UK quarterback Terry Wilson built a “foundation” for him to come to Kentucky when he hosted him on his recruiting visit. (Kentucky Football Photo)

After Joey Gatewood decided he was leaving Auburn and put his name into the transfer portal, he got a call from Kentucky recruiting coordinator Vince Marrow urging him to make a visit to Kentucky.

Gatewood, a four-star quarterback in Florida when he was a top 40 rated recruit nationally, had a good first visit to UK. His host was quarterback Terry Wilson, who led UK to 10 wins in 2018 before missing all but two games last year with a knee injury.

“Terry was the one who really built the foundation and told me how things were here. Still to this day our relationship is really good. That is my man. I can’t wait to see him get better,” Gatewood said about Wilson.

Wilson hopes to be fully recovered from his knee injury this season and Gatewood is asking the NCAA for a waiver to make him eligible this season. That could lead to them competing for playing time against each other next season but Gatewood wishes nothing but the best for Wilson.

“Terry is a great guy. I am ready to see him get back to himself and play ball. He’s a dude. It speaks a lot about him being a good dude that he was my host on my visit and did play a key role in recruiting me,” Gatewood said.

Gatewood heard and read speculation that his interest in Kentucky was not genuine considering some of the options he likely would have.

“When I put my name in (the transfer portal) I was open to everybody. Kentucky was one of the first ones to hit me up. Coach Marrow is a great guy and told me, ‘Let’s get you up on official (visit)’ and I said I would be there,” Gatewood said. “He’s kind of hard to say no to. I have said no but he’s a really good dude. He really cares about you and takes his time with you.”

It apparently was not a hard sell with Gatewood. He made a second visit to Kentucky before making his commitment but never visited any other schools.

“It is on the rise. Last season was strong and the season before that was strong. There is nothing going downhill for Kentucky football. It is only up from here,” he said.

“I didn’t have to go all around the country looking at somewhere to play. My home is here. That was a benefit for me. I didn’t have to go anywhere else. I came to Kentucky two times and it was fine. I was looking for what was the best for my situation. The coaches kept it straight up with me, kept it real. I needed that.”

He threw for 1,468 yards and 12 scores and ran for 1,100 yards and 16 scores to help his team win the 2017 Florida Class 7A state title. He redshirted in 2018 at Auburn and then played in five games as a redshirt freshman — he completed five of seven passes for 54 yards and ran 29 times for 148 yards and three scores — before deciding to transfer.

Gatewood said it was important for him to find another SEC school to continue his career because the “SEC is full of top dogs.” He believes he can play with any of them and thinks Kentucky can play with any SEC team.

“This program is nowhere close to going downhill. It is going up and up and I expect even more in these next years,” Gatewood said. “This program is going to be one of the top programs in the nation in the coming years. I really feel like they’re on a roll and I don’t think they’re going to stop. That’s why I wanted to be here.”

“They’ve got great size, first off,” Stackhouse said. “I think when you’ve got guards that (are) 6-foot-5, that can see over the defense, pick and rolls, have the ability to get downhill and finish, and they’re decent shooters …

“Obviously (Immanuel) Quickley is a great shooter. He’s one of their better shooters, so he’s a guy we have to stick with. But (Tyrese) Maxey is a guy that can get it going. Just a hooper, just a player. (Ashton) Hagans, his defensive ability and kind of getting everybody in their spots makes them good.”

Quickley, Maxey and Hagans had 40 points in UK’s first win over Vanderbilt and Hagans also had six assists and two steals. In last week’s win at Vanderbilt, the trio combined for 56 points, 19 rebounds, 11 assists and five steals while making only five turnovers in a combined 107 minutes of play.

“The numbers show the guards are willing to get to the free throw line and once they get there they all three make shots,” Dortch said. “Games in the NCAA Tournament often turn into rock fights and you need something like great free throw shooting to set you apart.

“Kentucky has the ability to get downhill with all three of those guards and drive to the basket. Cal can just let the guards take over a game. Teams with guards who can do that and then also make free throws traditionally do very well in the NCAA. Kentucky is fifth in the nation in free throw percentage and none of the teams above them may even be in the NCAA.

“With those guards they have all the ingredients you need to get through close games in rapid succession like the NCAA Tournament throws at you.”

ESPN analyst Jimmy Dykes believes UK is “built to win on a neutral floor” in March.

“You’ve got the three guards that aren’t going to turn it over, they’re going to guard their tails off, they give you nothing from the 3-point line. That’s really big at tournament time,” Dykes said.

Ole Miss coach Kermit Davis said not to underestimate that defensive ability. He calls Hagans the best “on-ball defender” in the nation but says Quickley might be the second best.

Davis also said it’s not just luck that has let UK win a lot of close games like teams likely will face in postseason play.

“When you play three point guards it helps (win close games),” Davis said. “All three can make plays on either end of the court and that’s how you win tough games like they do.”

Could Kahlil Whitney’s sudden departure from Kentucky impact future recruiting for the Cats?

“It’s not going to impact future five star players that want to buy into Kentucky,” she said. “Maybe it will impact the Chicago recruiting scene (Whitney is from Chicago) because I do not imagine Kahlil will go back there and plug (promote) Kentucky.

“But I have not heard any players say they are not going to Kentucky because of what happened with Kahlil. Top guards continued to commit to Kentucky after Quade Green left midway of the 2018-19 season.”

“It won’t hurt Kentucky with other players. Elite prospects welcome competition and don’t worry about being recruited over,” Sisk said. “Each player is also deciding for themselves.

“I have spoken to several people in the New York/New Jersey area (where Whitney played high school basketball) and there hasn’t been any negative feedback about Kentucky and I don’t think there will be.”

Freshman defensive back Joel Williams, originally a Florida commit, is the third player from Louisiana on the Kentucky roster now. The Cats signed quarterback Amani Gilmore last year and defensive back Kelvin Joesph transferred to UK from LSU before the 2019 season started.

Louisiana has not typically been a fertile recruiting area for Kentucky football but that might be changing according to Williams, a 6-1, 190-pound early enrollee.

However, that could be changing according to what Williams said last week during a media session.

“We’ve actually got some more Louisiana guys that are committed in 2021, but we ain’t gonna say nothing about that right now. We’re trying to get something together,” Williams said.

Former Kentucky All-American Kenny Walker says even today he gets asked a lot of questions about his “great” games when he was playing for the Wildcats over 30 years ago.

“I had a few great games but I don’t remember them as much as these losses. You just can’t get over these losses,” Walker said. “After all these years, 1984 Final Four you got a front line of Sam Bowie, Melvin Turpin and myself and in the second half we made three of 33 shots, 9.1 percent.

“The worst half of basketball ever (at Kentucky) and we had eight McDonald’s All-Americans on that team. I have still not got over it.”

Kentucky lost that Final Four game to Georgetown when it scored 11 points in the second. Walker doubts he’ll ever forget that loss to the Dream Game loss in overtime to Louisville in the 1983 NCAA Tournament along with the 1986 NCAA Elite Eight loss to LSU in his final collegiate game after the Cats had already beat LSU three times that season

“The support I got from playing at UK was just incredible. That is why I can come back and do things now because UK fans don’t forget and I am forever grateful.”

If you are going to the SEC Tournament in Nashville, Kentucky fan J.D. Shelburne has two shows scheduled at Ole Red (300 Broadway) during the event.

The country music singer will perform at 2 p.m. CST March 13 and then again on March 15 before the tourney championship game.

“I’m not sure Ole Red totally understood that SEC Tournament week is BBN week in Nashville,” Shelburne said. “You have got to cater to Big Blue that week.”

He also hopes to be performing at a UK pep rally — likely at Wildhorse Saloon (120 2nd Avenue North).

“That will be my first time to do that and I am really looking forward to it if it works out,” Shelburne, who lives in Nashville, said.

Shelburne is also featured on the cover of the 2020 Kentucky Tourism Guide that likely can be found in almost every hotel in Kentucky.

Quote of the Week: “He is perfectly normal. We have just seen a lot of abnormal progressions at Kentucky. He has been on the right track but there have just been so many abnormal guys at UK that we forget what this is like to have a guy stick around three or four years and then start to blossom,” CatsPause.com recruiting writer Chris Fisher on UK junior Nick Richards.

Quote of the Week 2: “When he says he’s not going to do something, he’s pretty solid he’s not going to do. He loves Kentucky, he runs that state. The fans love him there, he’s got the basketball program on lock there,” former Wildcat Kevin Knox on speculation John Calipari might leave UK to coach the New York Knicks.