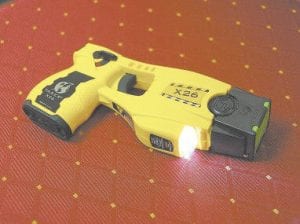 The Jenkins City Council received mixed news in its audit report for 2007 at its February meeting. The auditor, Lexington Certified Public Accountant Rodney Welch, told the council that while the city’s overall financial health is good, the loss of just over $100,000 a year in treated water is a problem which needs to be addressed.

“I’m not sure on the numbers, but the water department is treating fewer gallons than last year,” said Welch. “At one time they were treating three gallons for every gallon they sold. Still, the water loss is $108,000, and that’s real money (as opposed to depreciation and amortization).”

Welch also presented the council with a sealed donation from former Jenkins resident Dave Zegeer, whom he called the “Godfather of Jenkins.” Welch said the gift was to go to the city’s efforts to remove blighted and deteriorated houses. Zegeer is the former division manager of Beth- Elkhorn Corp., a division of Bethlehem Steel, and lived in the city for over 30 years. The Dave Zegeer Coal Museum in Jenkins is named for him.

Utilities Commission Chairman Kedrick Sanders gave the water department report in the absence of Water Department Superintendent Bo Hopkins. Sanders said the water loss situation has changed little since December. Sanders told the council the commission has adopted a new term for treated water lost due to leaks, “down the creek” water. However, Sanders said the department sold 250,000 gallons more in January than it sold in December.

Sanders also said city workers are currently doing a survey on water meters and found one bad meter out of the first 25 surveyed. Sanders said a faulty meter will always read in the customer’s favor, so a four percent rate of meter failure could cost the city a considerable amount of money. The city currently has 967 meters. Sanders said city workers will continue to check meters for accuracy on an ongoing basis.

The utilities commission also discussed a possible increase in water rates. Sanders said he had compared Jenkins’ water rates to surrounding communities and found that Jenkins’ rates are considerably lower. The commission is working with City Engineer Paul Nesbitt and Mayor Charles Dixon to adopt a long range comprehensive plan to upgrade the water system. Sanders said the commission recommends keeping the current rate for re-attaching water meters after they have been cut off at $25.

City Engineer Nesbitt told the council he has taken a dual approach to the city’s water situation. He said a short term approach and a long term plan will both be necessary to improve problems with the water system. Nesbitt pointed to a $25,000 allocation of coal severance tax funds recommended by Fifth District Magistrate Wayne Fleming and adopted in the Letcher County Fiscal Court’s coal severance fund priority list, recently submitted to the General Assembly, as a starting place to begin the short term work of fixing leaks.

Nesbitt agreed that water rates will have to be raised as part of a long term solution. He said he had directed the grant specialist at Nesbitt Engineering to begin putting together a funding package to address the long term problems, beginning with a Community Development Block Grant of up to $1 million. He said the funds will have to be matched on a one-to-one basis, but other grant funds can be used for the match. Nesbitt said half the other money will probably come from the Appalachian Regional Commission and the city should request the other half in a combination loan/grant from the U.S. Department of Agriculture’s Rural Development Agency. Nesbitt estimated it will take up to $2 million to upgrade the water plant and bring water losses down to an acceptable rate. The state’s acceptable average for water loss is between 18 and 20 percent.

“It’s (the funding package) like a mosaic puzzle,” said Nesbitt. “It will cost up to $2 million to fix the plant and water lines. It will be hard to get 100 percent funding, probably 80 percent in grants and the other in loans. We will pursue this if the city wishes. It didn’t get in this condition overnight and it won’t get out overnight.”

The council voted to have Nesbitt pursue the funding package. He said Rural Development will no doubt wish to examine the city’s rate structure if it bonds the improvements. Nesbitt also told the council he and Mayor Dixon had recently met with representatives of the Abandoned Mine Lands agency and it is very likely that AML will fund a water line extension to the Payne Gap area under its guidelines of funding in mine-damaged areas. Nesbitt said he had also asked for funding to dredge Jenkins Lake, which he said had been impacted by mining, and had “pitched” a total fix for the city’s water problems. He said AML is considering all three proposals, but the Payne Gap project has the best chance of success.

. The council voted to allow Mical Group/Environmental and Utilities to do an initial survey (core drilling) on ground water contamination from gasoline tanks from an old Chevron station which were removed several years ago. The location of the survey is under the area where the Community Trust Bank and Giovanni’s Pizza are located. City Attorney Randall Tackett and council member Rick Damron, who is an engineer, both agreed it would be in the city’s best interest to have contaminated soil removed if it is present.

. Sarah Brown of the Blighted and Deteriorated Property Committee approached the council and asked that the Cornett house on Hwy. 805 be moved to a priority position on the city’s list of property to be seized in court action. Brown said the house has come off its foundation and could slide onto the highway at any time. City Attorney Tackett said it would be placed at number one for action.

. The council voted to form a commission to study the advisability of authorizing the City Planning Commission to form a non-profit corporation to begin the process of obtaining an assisted living center for Jenkins

. The council learned that the Planning Commission will approach TECO at its state headquarters in Corbin to negotiate for a 250-acre site along US 23 in order to develop it for a shopping center. Planning Commission Vice-Chairman Jim Polly told the council that a national hotel chain and several restaurants, as well as a major discount store, have all expressed interest in locating there if the site is obtained.

. City Attorney Tackett will begin a study of a unified tax plan that will include restaurant and other business taxes to increase city revenues. The action came from a request by council member Terry Braddock to levy a three percent tax on green fees at the Raven Rock Golf Course. The council also asked Tackett to look into a proposal made by Braddock to condemn and seize blighted and dilapidated property under the process of imminent domain.

. Outside Foreman Shade Baldwin reported that December was the best month ever for blue bag recycling with almost 1,100 bags collected. Baldwin also asked the council to consider raises and retirement pay for all city workers.

. Police Chief Jim Stephens reported that the department answered 98 complaints in December and made 16 arrests. Stephens said that all officers are now equipped with Tasers with video/audio capability and have been trained in their use. Stephens also told the council that a recent photograph in The Mountain Eagle may have created the impression that Jenkins officers are working out of city limits. Stephens said the reason a city police officer responded to a robbery call at the Dollar General Store in Mayking was that a Letcher County sheriff’s deputy was alone and had requested backup from the city. Stephens said Jenkins officers do not leave the city except in cases when they are requested to back up other officers in the county.

. Mayor Dixon reported that the city will continue to pursue delinquent taxpayers and to aggressively ticket and fine violators of the city sticker ordinance. Dixon said the fee for city stickers is $10 and the late charge for a person who is ticketed is $20.

. Dixon also reported that the city is now collecting garbage in Cane Branch, Joe’s Branch, Dairy Hollow, and at two residences in Hidden Drive. Dixon said if weather prevents garbage collection, it will recommence as scheduled on the following business day.

. City Attorney Tackett and City Engineer Nesbitt attended a meeting in Frankfort with Commissioner for Rural Roads B. D. Wilson to present the city’s case for a welcome center and to obtain 10.8 acres from the state to complete the site. Tackett said that Wilson was very positive in his response and will study the issue. However, the state will not fund a welcome center so Tackett said the site will be called a Tourist Interpretive Center from now on. Tackett praised 94th District State Representative Leslie Combs for her help with the meeting.

. The council heard the first reading of an ordinance to move water meters to the edge of a property owner’s property or onto city property for the safety of city workers.

. Council member Braddock complained that he did not believe that road funds were being used wisely and cast the lone ‘no’ vote to approve the financial report for that reason.